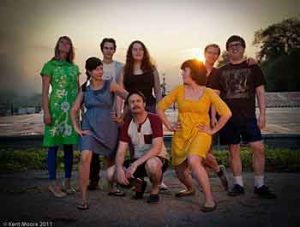 Earlier this week Ghettoblaster shared the video for Missionaries’ video for “Cliff”.  Hope For the Tape Deck  are set to release Demo EP the release that includes the song (first on the A side), which is the latest from Missionaries, a band that features members of Eternal Summers and The Young Sinclairs.
Seanmichael Poff has been evolving his sound and songwriting for several years with Missionaries and Ghettoblaster caught up with him recently to discuss the EP.  This is what he said.
When did you begin writing the material for your most recent EP?
It was in May of 2012, I believe. I was going through a lot then and the songs just started flowing… which until then I had just been revamping older songs of mine for the past year.
What was the most difficult song to take from the initial writing stage through recording and mixing?  Why was it so troublesome?
It was most likely “Witch of November”. It felt like the most difficult because there are a lot of changes within that song and the group at that point was tending to focus a lot on following my vocals. Usually vocals come last so it was a bit difficult and took a decent number of takes to get done. The process for the demo in general actually went pretty fast. So really the number of takes it took to get “Witch” done was only about five or six goes at it. The layers were the most time consuming but also the most fun.
Which of the songs on the record is most different from your original concept for the song?
Again, I’d have to go with “Witch”. Only because it started out as sort of a sea shanty on banjo with dueling melodicas. We used to be a folk group a couple years back.
Did you have any guest musicians play or sing on the record?
No it was all us. When we recorded the demo we were a seven piece and now we’re a six piece. So our great friend Cat Conover is on the record, but no longer plays with us live.
Who produced the record?  What input did that person have that changed the face of the record?
Well, since it was a demo our drummer Marshall Hicks produced it. He’s got a great ear for mic placement with the resources we have. He’s definitely my co-captain within the group. He had a lot of input with the demo often times just taking liberties into his own hands with how the song should sound which I didn’t mind at all. I trust him completely in that aspect.
Is there an overarching concept behind your new album that ties the record together?
Well, it’s kind of a teaser to a full-length we’re starting work on next week. Three songs on the demo (“Cliff”, “High Anxiety”, “Burn Out)” will have a full-length studio version on the next record. The working title for next album is called Partner, but that could change. The full-length is about exploring all stages within a relationship. When I say relationship I don’t just mean romantic. I wouldn’t want to give much more away than that. Sometimes I hate finding out the real meaning behind songs or albums.
Have you begun playing these songs live and which songs have elicited the strongest reaction from your fans?
Oh definitely, I believe we’ve been playing most of these songs for the better part of a year or more. The only exception is “The New Stone Age”, that’s a cover on the demo we’ve been playing for just a few months. It’s an Orchestral Manoeuvres in the Dark deep cut from Architecture & Morality.
(Check out the video here: http://ghettoblastermagazine.com/2013/video-premiere-missionaries-cliff/.)