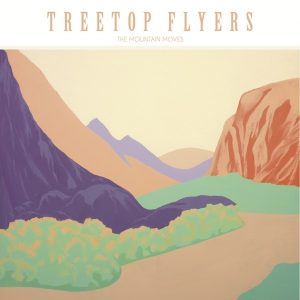 Treetop Flyers are a tuneful, folk-rock band whose reference points include all of the best acts of the ‘60s — from Steven Stills (from whom they borrowed their moniker) to The Byrds to Simon & Garfunkel, the band reference the soulful folk sounds of the yesteryear.  It is somewhat shocking then that a band who so convincingly conjure vintage Laurel Canyon vibes are from London.  But, British vibes can be felt here too.  Treetop Flyers owe a debt to The Faces and The Rolling Stones.
Treetop Flyers single, “Houses Are Burning,” debuted recently on Rolling Stone  … https://soundcloud.com/treetopflyers/02-houses-are-burning-1.  The track offers warm harmonies, brooding vintage vibes, and throat-quivering emotion.
Ghettoblaster caught up with TF’s Reid Morrison as the band prepared for the release of their new record, The Mountain Moves, coming out June 25 via Partisan Records.  This is what he told us about it…
When did you begin writing the material for your most recent LP?
I would say about three years ago.  This is our first LP so the songs are a mixture of songs from across a few years, although one song, “Postcards,” was written in California before we started recording, which was a great feeling.

What was the most difficult song to take from the initial writing stage through recording and mixing?  Why was it so troublesome?
We have a song called “Haunted House,” which is a live favourite when we tour, It’s a journey song that I had written before Treetop Flyers started and its one of those songs you can get really wrong if you record in a certain way. We tried before to a click and it sounded so stuffy.  We wanted to have the same feeling as we do live, but for it to be controlled at the same time. The mix on that song was a bit back and forth but we got there in the end.

Which of the songs on the record is most different from your original concept for the song?
I would say “Picture-show.”  We recorded the song more acoustic based in the verses, but then we added a few electric guitar parts over the top, which changed the feel. It sounds good like that, as there are harmonies on it which were laid down during the sessions that were not arranged before. I think we also wanna record an acoustic version of this song too. It really works when we do stripped down set’s.

Did you have any guest musicians play or sing on the record?
No we don’t unfortunately. We wanted Devendra Banhart, but he was too busy

Who produced the record?  What input did that person have that changed the face of the record?
Noah Georgeson. The guy is such a lovely humble person, he was great at getting guitar tones and knowing when there is too much or too little in songs.  A lot of the songs have percussion, which really bought out the grooves too.  It was the subtle changes he made. He also made me feel really comfortable singing

Is there an overarching concept behind your new album that ties the record together?
We didn’t have an intentional concept.  All we did was go there with 15 songs and pick the best 12, but after doing that most of the songs have an underlining element of hope in the songs. So inadvertently hope and striving to do better and get over life events became a concept here.

Have you begun playing these songs live and which songs have elicited the strongest reaction from your fans?
We road tested all the songs before we left to record apart from “Postcards,” which we wrote whilst recording.  It depends on the crowd really, but “Making Time,” “Waiting On You,” “Is It All Worth” and “Haunted House” get great reactions. It’s an individual’s tastes at the end of the day, so it always changes.