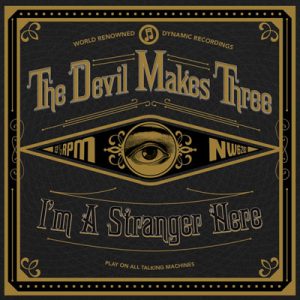 Part road songs, part heartbreakers and part barnburners, the rowdy and rootsy trio The Devil Makes Three’s fourth full-length studio album, I’m A Stranger Here, was produced by Buddy Miller and will be released on October 29 on New West Records.
Recorded at Dan Auberbach’s (The Black Keys) Easy Eye Sound in Nashville, I’m A Stranger Here is a very dark record thematically, lyrically and sonically The 10-track collection features the drummer-less acoustic threesome of singer/guitarist Bernhard, guitarist/banjoist Cooper McBean and stand up bassist Lucia Turino coloring their songs with an expanded sonic palette – percussion, strings, electric guitar, fiddle, vibes and a variety of horns are used to powerful effect.
TDM3’s sound is inspired as much by mountain music as by Preservation Hall jazz. Further, I’m A Stranger Here was inspired by the bands travels and travails so far, a journey that has lead them down numerous roads since they first left their picturesque rural hometown of Brattleboro, VT. While most bands are propelled from behind by a drummer, TDM3 builds exuberant rhythms from the inside out, wrapping finger-picked strings and upsurging harmonies around chugging acoustic guitar and bass, plying an ever-growing audience onto its feet to jump, shake and waltz.
Ghettoblaster recently caught up with frontman Pete Bernhard to discuss the record, which they will be supporting with a tour that begins later this month.  This is what he said about it.
When did you begin writing the material for your forthcoming album?
Some of the songs on the new record we started years ago some of them I wrote just before we went into the studio and finished them there. We write about a record every three years so we had a lot of material stored up.
What was the most difficult song to take from the initial writing stage through recording and mixing?  Why was it so troublesome?
To be honest they all went really smoothly…. but If I had to choose one it would be the second track on the record, “Worse or Better.” It sounded so good on the demo and none of us were satisfied with how it came out initially when we listened back to the first mix. About five mixes later it sounded great but the moral of the story is that falling in love with the demo can be dangerous.
Which of the songs on the record is most different from your original concept for the song?
“Dead Body Moving” is the one that transformed the most to my ear. We added some percussion to the song and it totally changed the way the song felt. We also added fiddle and the whole song came to life in a way I never imagined when we were playing it just the three of us acoustic.
Did you have any guest musicians play or sing on the record?
Yes, we added fiddle, electric guitar, Baritone guitar, percussion, and horns to this record.  Buddy Miller played both electric and baritone guitar.
Who produced the record?  What input did that person have that changed the face of the record?
Buddy Miller produced this record. As I said Buddy played electric and baritone but as producer he helped to write harmonies, change arrangements and also organized an amazing group of musicians and engineers to sit in and record the album. Buddy had a big hand in the song choices and picked 12 out of 20 demo tunes we submitted and that is what you hear on the record.  He insisted that we all record live in the same room and that we did very little overdubbing which really made for a live and real sounding record. This is the way we prefer to record anyway so it made everyone relaxed and we had a lot of fun making the record, which is not always the case.
Is there an overarching concept behind your new album that ties the record together?
I would say this is the darkest record we have ever written lyrically and musically. We made a point of focusing on that material more on this one. I think if it were a book of poetry it would be about death and things ending more than anything else. Still the record is upbeat in the way it feels so I think it won’t bring anyone down to low.
Have you begun playing these songs live and which songs have elicited the strongest reaction from your fans?
We are playing about half of the songs live now and I think the strongest reaction is to the title track “Stranger” but the overall reaction to all the new songs has been good.
(Catch the band live at one of these dates: