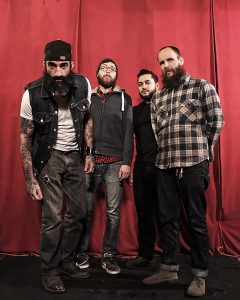 Melotov Records recently announced the signing of New York City’s Tiger Flowers. Melotov will release Tiger Flowers’ debut full-length, Dead Hymns, on April 8.  “Hometown heroes” of the New York scene, in the words of MetalSucks, Tiger Flowers are renowned for their cathartic sound and unfiltered realness. Their live shows are the stuff of local legend and their brand of metallic hardcore unites unhinged aggression, bottomless melancholia, and swaggering rock n’ roll. BrooklynVegan has likened the band to “elders who pushed the genre into new directions, like Deadguy, Converge, and Rorschach”. Exclaim! Magazine described their 2011 self-titled EP as “uncompromising, brutish, and noise-filled”.
Although members of Tiger Flowers have played in bands in the New York scene since the late ’90s, these veterans attack with fresh, unbridled intensity that is nothing about the past, everything about the right now.
Ghettoblaster recently caught up with vocalist Jesse Jame Madre to discuss the album.  This is what he told us.
When did you begin writing the material for the album?
We’re kind of in a constant state of writing, never really stopping, so I guess it started over two years ago with the song “Midnight Mares.” We sat on that for a while then wrote “Tectonics of Teeth” and that’s when decided to set up some recording dates, at which point we focused on writing more songs. The rest got finished up last August and we went into the studio.
What was the most difficult song to take from the initial writing stage through recording and mixing?  Why was it so troublesome?

“Century Blues,” haha, we had a little mishap with one of the parts that none of us caught at first. In the mixing we noticed it luckily and our producer Eliot Geller was able to iron it out and figure out what went wrong. The trouble with this (and apparently a lot of our songs) is our time signatures. When we recorded our first EP, the guy insisted on using a click track, which we feel took away from our natural flow and sound. As he was trying to get the click track together we walked in on him holding his head in his hands, mumbling, “I just don’t get it!” Haha, we spent more time waiting on his click track than recording.
Which of the songs on the record is most different from your original concept for the song?
I don’t know if any of them strayed far from what they were intended to be. When we set out to write a song we have a good idea about what we want from it and try to nail it down. Overall the songs on this album are different from previous material but that was intended and just a natural progression we felt.
Did you have any guest musicians play or sing on the record?
Nope, all us. Though for our next record I plan on grabbing my friends Keller from Meek is Murder and Aaron from Hivesmasher for some guest vocals if they’re down. Each of them has such a great, unique voice, I think if we did a little back and forth it could really get filthy and heavy.
Who engineered, mixed, mastered and/or produced the record?  What input did those people have that changed the face of the record?
It was engineered and recorded by Eliot Geller at Geller Cellar Studios and then mastered by Shane Frisby over at the Brick Hit House. Eliot really helped out with capturing our sound as live and raw as possible. He also had some great insight into a couple tweaks that ended up making parts bigger and better. He sent out one mixed song to four mastering places for us and Shane’s just hit the hardest so we went with him and he brought our sound out even more.
Is there an overarching concept behind the record that ties it all together?
I can only really speak about it from a lyrical standpoint but on this record I tried to take away any glimmers of hope whereas on our first EP I feel like each song had a bit of a silver lining. At the time of writing this one of the guys was writing these incredible landscapes and I was in a weird place and was able to get out what I needed to. I think the tone set itself. Not sure if we’re smart enough to think that far ahead about concepts, haha.
Have you begun playing these songs live and which songs have elicited the strongest reaction from your fans?
We’ve tested the waters with these songs. Our new set is all off this record except for our closer. It seems everyone is digging on “Century Blues” and “Cruisin’ ’til the Wheels Fall Off” the most. Both songs are completely different, one being five minutes, the other coming in under one minute, but the riffs get stuck in your head. At least that’s been the feedback so far. Looking forward to people getting to know them all more and see if that changes or not, but it’s always a nice thing to see people who’ve never heard a song before, or heard your band at all, catching a good groove and banging their heads.
(Visit Tiger Flowers here: https://www.facebook.com/TIGERFLOWERSNYC.)