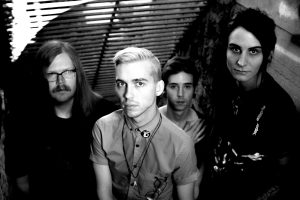 Tidemouth began life in 2008 as a screamo/grind beast, in line with bands like Orchid and the Three One G Records roster. A collection of demos and one 2010 EP captured this early phase. In 2015 now the band reappears, evolved into something completely new.
Velvet and Stone drips with feeling from the first note to the last. A supremely confident work of art, it is both a gut-wrenching purge and a wonderfully self-aware bit of theater. It is also a masterpiece of minimalism – simplicity is wielded to maximum effect. On Velvet and Stone, Tidemouth puts forth a raw, blackened version of hardcore punk, in line with current minimalists like Raspberry Bulbs. Primal drums and eerily warm, almost-clean guitar tones create an unsettling balance of violence and calm. On top of this is painted a heavy streak of dark, melodic goth-ness that elevates the music to a whole other place.
Ghettoblaster recently caught up with Mike Kilker of Tidemouth to discuss his stomping grounds, Santa Clarita, Mountasia, and National Vegan Pizza Day.
What’s your town’s nickname?
We live in a suburb-ish city 45 minutes north of LA called Santa Clarita. The marketing team for the city (yes it has a marketing team) decided to call the place “Awesometown.”
What’s your nickname for your town?
“Awesometown” is funny enough, so we just stick with that.
Why do you live there?
Most of us grew up here and are too scared to leave.
Yeah, you can’t really choose where your parents put their roots, you just have to make the most of it.
What’s the weirdest thing that has ever happened to you there?
I don’t want to turn this into “Mike’s ridiculous alien/ghost story interview,” but I definitely saw a fucking alien ghost one night.
What is your favorite local attraction (monument, park, etc)?
When people ask, “Where is Santa Clarita?” We reply with a quick, “Magic Mountain.” However, there is a smaller ‘family fun center’ called Mountasia that is twice the fun for a fifth of the price.
What is your favorite local event or festival?
National Vegan Pizza Day, but that’s kind of everywhere…
What is the best time of year to be there?
Definitely not summer. It gets so windy and hot your whole face gets chapped.
Who is your favorite local celebrity?
Zakk Wylde lives here. Everyone except us has a story about seeing/meeting him.
Where is the best place to drink and what’s their specialty or happy hour?
We drink almost exclusively at a place called ‘The Drifters.’ If you want to hang out with sad dads on a weeknight, which you do, this is your place.
Who has the best jukebox (and what’s in it)?
I can’t think of a single non-digital jukebox. In a weird way that paints a better picture of this place than any other question.
Do you play music there? If so, where is your favorite place to play?
We recently started playing shows at a place called ‘Railroad Cafe.’ The owners have been kind enough to let us throw a few shows there, and in a town with 0 all ages venues this could be a pretty cool thing.
Does where you live influence your music?
Only in a negative way.
What is your favorite place to see live music and what was your favorite show there?
Once upon a time in high school we had a thriving hardcore punk scene. Some local bad boys would throw shows at the local American Legion Hall and had some truly amazing bands come through. Ruiner, Ceremony, The Carrier, Life Long Tragedy, Touche Amore, and Graf Orlock all played our little spot. It’s really hard for me to name a favorite.
What is your favorite local band?
Ryan, Cody (guitar and bass) and I loved a band called Johnny Cage (RIP) from that previously mentioned high school era. The name kinda of makes you think of bro-core, but they were an amazing dark yet melodic hardcore band, that I think had a pretty huge influence on us.
What is your favorite diner or restaurant and what is their best dish?
Tomato Joe’s Pizza. One of the few places that carries vegan cheese and they have a beer batter crust that is just truly unbelievable.
What is your favorite record store and what was your best find there?
We used to have a record store called “Rock Candy Music and More” that Ryan worked at, but like all good things in this town it died off too.. The best record I ever got from there was ’19’ by Adele. It’s still played frequently.
What is your favorite local publication (alternative weekly, zine, website or blog)?
There’s a new zine from a friend of ours called D. E. Press. It’s a poetry and photography zine with some really nice stuff inside.
What is your favorite local shop?
The Starbucks on Kenroy and Soledad.
If you could live anywhere else, where would that be?
Seattle ’cause Frasier.
(Tidemouth’s debut LP Velvet and Stone is out June 9 on Melotov Records. Visit them here: http://facebook.com/tidemouth.)