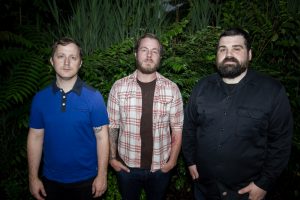 Melotov Records continues its 2014 roll with Weak People, the debut full-length by Holy Tongues, set for an August 5 release.
Holy Tongues is comprised of three members of the late Ruiner, the Baltimore band that made a name in the ’00s via two LPs on Bridge 9 Records, the latter produced by J. Robbins (Modern Life Is War, Coliseum), and via tours with the likes of Strike Anywhere and Pulling Teeth.
On Weak People, the trio – guitarist/vocalist Dustin Thornton, bassist/vocalist Stephen Smeal, and drummer Joey Edwards – has evolved out of the hardcore zone of its previous band and into a realm of sledgehammer rhythms, churning low-end, and radiant textures. At times melancholy, at times downright epic, there is a relentless forward motion underlying all of Weak People, implying loudly that nothing is permanent, that this a mere snapshot of one point in time. This is the sound of people, of a band, in transformation.
Ghettoblaster caught up with Holy Tongues’ bassist Stephen Smeal to talk about his unlikely favorite record, The Get Up Kids’ Something to Write Home About. More importantly he gave us insight about a song from their record, a tribute to his mom and her battle with colon cancer. This is what he said.
What is your favorite album?
I hate this question. It’s impossible to pick one specific album out of my 32 years on Earth as my favorite. So I’ll pick one of my favorite records… The Get Up Kids’ Something To Write Home About.
Do you remember when you received or purchased the album?
I don’t actually remember specifically when I bought this record but it was after I saw them live for the first time. They opened up for Weezer at the Bender Arena in DC. I had heard the name before but never listened to their music. Once they launched into “Holiday” at that show I was hooked.
What is your favorite song on the album?
“Ten Minutes.”
What is it about the song that resonates with you?
I’m not really sure why the song does. It’s interesting because Jim Suptic sings lead on that song instead of Matt Pryor, it’s a pretty rocking song, and the key change and vocals at the bridge rule.
The record itself sticks with me because it transports me back to a decade ago when I listened to it constantly even for years after that. Each song triggers memories from a snapshot of time in my life whether it was getting dumped by a girl, hanging out late with some friends, or meeting my fiancé.
Have you ever covered a song from the album?
No, that would be sick though.
What is it about the album that makes it stand out against the band’s other output?
It was the first record I heard by them. I think most of the time the record in which I discovered a band remains my favorite. It’s just great from start to finish. It kicks in right away with the hard hitting “Holiday” gives you a breather track with “Out Of Reach” and then keeps rocking until the beautiful end track of “I’ll Catch You.” So good.
Have you ever given a copy of this record to anyone? What were the circumstances?
No, but I have put “I’ll Catch You” on a mix CD for a girl before for obvious reasons.
Which of the records that you’ve performed on is your favorite?
I think whatever the newest record I’ve performed on is usually my favorite. For me it would be Holy Tongues’ Weak People.
What is your favorite song on the album and why?
“1/10/82 – 8/8/12” It’s the last song on the record and the last song we wrote for the record. I’m new to writing lyrics and I think these are the best I’ve written so far and the music just matches everything so well. January 10, 1982 is the day I was born, and August 8, 2012 is the day that my mother died from cancer. Most of the song is about the last five days of her life when I took care of her with my family. Pretty much every line is a direct quote or exact thing that happened during those days. My mother showed amazing strength through her 11 years of fighting stage four colon cancer; I guess this song is kind of a tribute to the strength she instilled in me to get through hard times like these.
(Visit the band here: https://www.facebook.com/holytonguesbaltimore.)