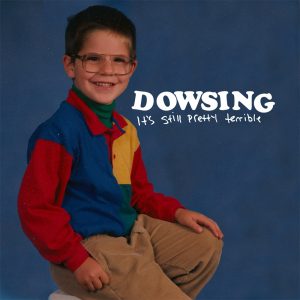 Chicago, Illinois is a city that is no stranger to emo and punk heavies.  Braid, Smoking Popes, Alkaline Trio and the list goes on and on.  Rising indie/emo band Dowsing are keeping the legacy alive as part of the Count You Lucky Stars roster.  With a split with Parker and their debut full-length under their belts, the band perfect the delivery of sincere rock music that is pleasing to the ears.
Ghettoblaster recently caught up with Erik Czaja to discuss It’s Still Pretty Terrible, their strongest and most cohesive release to date.  This is what he said about it…
When did you begin writing the material for your most recent album?
During the writing for our debut EP.

What was the most difficult song to take from the initial writing stage through recording and mixing?  Why was it so troublesome?
“What Did You Ever Do?” because I played part of the song without a click track or drums.  Somehow it lined up though. I kept messing up with the click track.

Which of the songs on the record is most different from your original concept for the song?
Our song “Wired for Success” probably, because we recorded an extra/extended bar of music to it without realizing it and the ending does not to line up to a click tract and is slightly faster, but somehow worked well.

Did you have any guest musicians play or sing on the record?
Yes, we had a few friends help us out.  Most guest vocals were done by Brandon Lutmer of Joie De Vivre.  We also had Keith Latinen of Empire! Empire! (i was a lonely estate), Warren Franklin of Warren Franklin fame, his brother Brian and our friend Colin. There was another guest vocal track by our friend Chris Liu of Brave Bird that we did not use, but might be released soon!

Who produced the record?  What input did that person have that changed the face of the record?
Chris French of Joie De Vivre has recorded all of our music.  He just made us play until we didn’t mess up that much.

Is there an overarching concept behind your new album that ties the record together?
The LP is about a time of transition for me.  I had been living in Chicago for a year and I was single.  There are some songs about the past too.