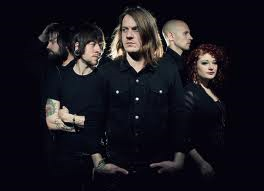 In creating music, what matters most is the engrained desire and effort to make something that resonates; music that can be felt in the pit of the stomach. And, above all, creating music that matters. A delicate and fragile balance of influences and sounds is what defines Those Mockingbirds. It could be a distorted guitar, ambient vibes, or the combination comprised of male and female vocals. It may seem like the pieces of the puzzle are spread all over the table while in reality they’re creating a single picture that all makes sense.
Those Mockingbirds’ debut full-length album is slated for release in early 2014, with the title still to be determined. Engineered by Howard Willing (Smashing Pumpkins, MUTEMATH) and Dean Baltulonis (The Hold Steady), the band planted themselves at the Wild Arctic Studios in Portsmouth, NH for the effort, committing themselves to the music, each other and the creative process.
The release of their video for “How To Rob A Bank” found the band beating the bush hard, and they ended up on Ghettoblaster’s doorstep late last year.  Truth be told, we were impressed, and delighted when the band’s killer video ended up in rotation at MTVu.
So we’ve circled back to get to know the band better, via TM’s Adam Bird, and get a glimpse at their future plans.  This is what he told us.
The “How To Rob A Bank” video just hit rotation on MTVu.  How did that opportunity come about?
We got the video into their hands and they ended up liking it enough that they offered us a spot in The Freshmen. From there we just beat the pavement to get fans and friends to help us with promoting the contest.
Was having a narrative video rather than a performance one the first choice of this project?
Yes actually. We knew we wanted a narrative video before we knew anything else about it. We all collectively agreed that a better story can be sold without worrying about how and where you’re going to set the band up, so instead, I just grabbed a megaphone and ran around screaming the words.
When does your debut record hit the streets?
As far as the whole thing goes, we haven’t set a date yet, but we will be releasing more music from it very soon.
When did you begin working on that and who was involved in bringing that to life?
We demoed and wrote the record throughout 2012, and started recording it towards the end of that year in a few sessions. We didn’t finish it until about March or so of 2013. So it took a bit because we were making sure we got everything right. The record was produced by Dean Baltulonis and it was mixed by Howard Willing. Also, we were fortunate enough to get Daniel DeJesus, from Rasputina, a band that we admire greatly, to play cello on one of the songs.
How difficult was it for you to put your lives on hold and travel to NH to make that record?
Not any more so than touring, honestly. We planned appropriately, and did the record in a  few sessions, so it wasn’t as if we all moved to NH for three months or anything.
For a relatively new band, you’ve been covered by a lot of press outlets.  How important is personally beating the bush for a new band?
I think it’s a really major thing that bands don’t do enough of. Yes, it’s very hard to get people to pay attention to you when you’re a small band, but that shouldn’t stop anyone, because press is a fantastic way to get a bands name out there.
Do you find that living in LA provides you more opportunities or competition?  How do your surroundings catalyze you as an artist?
I have no idea, because we are from New Jersey. Haha. But the question still applies, just on the opposite coast. We live 11 miles from downtown Manhattan, and I have thought about this kind of thing my entire life. I think the answer is that it provides us with more competition, which is a good thing mostly because, living here, you are constantly seeing bands around you doing well, and seeing where the bar is set, helps teach you what you need to do to get noticed.
When can we expect to see a tour in support of the forthcoming record?
We’re going to start hitting the road in February with a few scattered dates, but in March we are going out a bit more frequently. So, starting in March, expect us to be on the road quite a bit.
(Those Mockingbirds recently premiered their video for their single, How To Rob A Bank here: http://youtu.be/qODaCcMTiKc.  Purchase the single on iTunes here: https://itunes.apple.com/us/album/how-to-rob-a-bank-single/id722990166 before visiting them here www.thosemockingbirds.com.)