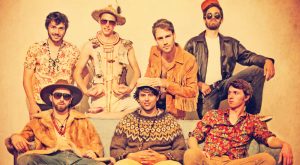 Hailing from Detroit, Michigan, Joe Hertler is a growing talent quickly garnering attention across the Midwest. Called “a bourgeoning Michigan talent bound to be on everyone’s radar soon” by Mostly Midwest, Joe Hertler & The Rainbow Seekers promise nothing but the best.
The latest release, On Being (released via Bad Mascot in February), showcases Hertlers ability as a singer-songwriter to create cohesive songs that dance across genres and easily charm listeners. The album lies on the fringe of pop and folk rock, combining light, animated instrumentals with energetic vocals. Hertler’s songwriting prowess shines in his ability to take listeners through a story without sacrificing his signature liveliness. Over the past year, Joe Hertler & The Rainbow Seekers have been building buzz across Michigan. With the release of the band’s album On Being, the band has received critical acclaim across the state. All Around Sound referred to the band as” energetic, fun, and [with] a blindsiding wealth of songwriting talent, ” and Revue Magazine chimed in on the album, suggesting that “‘On Being’ has a timeless sound that will sound great years from now. Hertler is that good.” Having recently played alongside artists like Electric Six, Frontier Ruckus, The Civil Wars, Matt Pond PA, Dale Earnhardt Jr Jr, Breathe Owl Breathe, Chris Bathgate, and Atomic Tom, as well as selling out their own shows across Michigan, they are no strangers to entertaining crowds. Bringing undeniable talent and natural charismatic exuberance to the live show, Joe Hertler & The Rainbow Seekers performances are not to be missed.
Today Ghettoblaster has the pleasure of premiering Joe Hertler & The Rainbow Seekers’ video for “The Garden.” Enjoy it here: