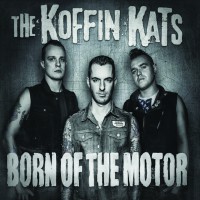 Born of the Motor

Koffin Kats are one of the most known, respected and celebrated psychobilly bands around today.  Pomade, whiskey, revving engines, tattoo clad betties and punk rock abound on their tribute to their hometown of Detroit, Born of the Motor.  The band’s seventh full-length, Born of the Motor drops via Sailor’s Grave Records on October 22.
Ghettoblaster recently caught up with KK’s Vic Victor to discuss the album.  This is what he told us.
When did you begin writing the material for your forthcoming album?
We went into the basement and hammered out all of the music in the few weeks between getting back from a very cold Canadian tour and going back to Europe this past spring/summer. We were there for three months so I had plenty of time to write lyrics and do some tweaking to the arrangements. We pretty much went into the studio as soon as we got back.
What was the most difficult song to take from the initial writing stage through recording and mixing?  Why was it so troublesome?
Because we are such a close band of only three members, we don’t run into that problem too often. When I say close, I mean we spend the majority of a year with each other doing music. So we kinda already know what will work and not work at all for this band.  I wanted Ian to have more of a vocal presence on this album. So there were a few tracks where we worked to find the right harmonies and the right singing style. “Giving Blood” was one of them. Once we were on the same page with our recording engineer/ mixer about the direction we were going with the vocals, everything came together.
Which of the songs on the record is most different from your original concept for the song?
The last track called “Gone To See The World” wasn’t really meant to be an full on verse chorus type song.  Just kind of a weird little quick song like we have done in the past with a 30 second song called “Blue Eyed Drug.”  John Kay, wearing his producer cap while we were in his studio, convinced us to extend it, but to also keep it stripped down. Just Ian and I playing guitar. First time I’ve officially played guitar on a KK album ha ha.
Did you have any guest musicians play or sing on the record?
No. It’s just us. John jumped up from the mixing board a few times to add some vocal flavor. But that’s about it. One of these days I’ll write some kind of a duet.
Who produced the record?  What input did that person have that changed the face of the record?
John Kay. He worked with us on recording the last few albums. This is our second run with him doing full on recording, mixing, and production. The first time was our “Drunk In The Daylight” album. Over the years of working together and both parties improving their respective skills , I was confident that we could get this album right where i wanted it sonically. He definitely put some work into the guitar tone. This doesn’t sound like what we have recorded in the past. The idea here was to really try to recreate the “live” tone.
Is there an overarching concept behind your new album that ties the record together?
Each song tells its own story, owns its own guitar or vocal hook. But we wanted to make sure that if you heard any of these songs in a mix of previous recordings, you would know that its a track from “Born.”
Have you begun playing these songs live and which songs have elicited the strongest reaction from your fans?
Were not really one of those bands that can get away with showing up and playing all new songs that our crowd doesn’t know. At this time, the album isn’t out for another week. Only one track has been released and that’s the title track. It’s been awesome to see people on this tour know what it is when were playing it though!