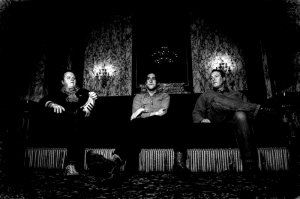 Happy Noose is plangent, dirty, dark pop. Their music aches with desire, it is morose, yet joyful with a real swaggering gait. Happy Noose is striving to craft their own sound, a vision of punk rock that embraces musical elements from the past and present. Their new EP, Amagosa, dropped October 1 through Dead End Social Club Records and holds sonic similarities to early ’80s goth rock, uptempo proto-punk, and classic ’90s indie rock. The trio, Scott (ex-Wait in Vain and Insubordinate), drummer John Dahlin (ex-the Accused and Honey Bucket), and guitarist Timothy Grisham (ex-Aires and Graces and the Revlons) have a sound that is both singular and familiar.  Further, the EP, the first of two scheduled for release, was produced by Tim Green (The Fucking Champs, Nation of Ulysses).
Ghettoblaster caught up with guitarist Grisham to discuss the record.  This is what he said about it.
When did you begin writing the material for your most recent EP?

Most of the song on the Amagosa EP were written in the winter of 2011-2012, although some strands of it were not finalized until the summer of 2012. We were just putting together the last vocal arrangements of “Eye of the Storm” and “End Song” as we were about to go into the studio to record the EP’s.
What was the most difficult song to take from the initial writing stage through recording and mixing?  Why was it so troublesome?

The sessions for the new EP was recorded in tandem with the Haunted EP, which we are releasing in early 2014. For the most part the recording of the songs was pretty fluid, most of the songs we had already folded into our live set by the time we recorded them; which is not uncommon for it – it helps us test the material and think of ways to do something a little different. We recorded a number of songs and mixed them in only three days, so it isn’t that we slaved over the records. “Locket” , off the Haunted EP took the most takes to get the timing right. But on this EP, “Amagosa” and “End Song” have the most overdubs, although not that many, for the most part this was recorded live in studio, so mixing and getting the dubs just right took the most time. Tim Green made the whole process really relaxing so I wouldn’t characterize anything as troublesome.
Which of the songs on the record is most different from your original concept for the song?

That’s a good question, and one I don’t know if I have a clear idea of what the answer is. For the most part I have a good idea of the concept of the song before I bring it to the band. But “Amagosa” was a song we played live for almost a year before recording it. It was the first song written after recording our debut LP, so the live experience added a level of nuance I don’t recall it having when we first were bashing it out. I recall it having a slightly more ploddy arrangement, a little too restrained as well – but the changes were fluid and natural rather than a huge rewrite.
Did you have any guest musicians play or sing on the EP?

Oddly enough, no. Which is not the norm for us. We did it pretty raw and close to the natural, live presentation of the band. This is not how we typically have worked. For example on the record we are working on right now we have long time collaborator Derek M. Johnson playing cello on a few songs, You Are Plural’s Jen Grady singing duets with Ryan on a couple, and contributions from friends like Broken Water’s Jon Hanna. So this is a little different, it is more immediate than our working method.
Who produced the EP?  What input did that person have that changed the face of the EP?

Tim Green produced the EP, and it is a great coup. One of the first localized punk bands I really fell in love with was Nation of Ulysses – who played Olympia a number of times. Tim later moved to Olympia and produced songs for one of John’s old band’s the Wrong Notes. I always loved his work in bands like Ulysses and the Fucking Champs, and he has created a body of work from Bikini Kill through the Melvins and Comets on Fire that I think will really put him on a level of producers that people will look back at to see how they got “their sound”.
Tim certainly has a more defined sound than some people we worked with, and part of recording with him was to have that experience of sending our songs through someone who has an aesthetic approach to music. Recording in his studio (Louder Studios) on two inch tape, all analog, brought a low-end dirge that I don’t know would have been brought out of us with another producer. In that regard the record is very “Tim Green”. But, conversely, I don’t think we are the typical band that records with Tim – we are much more pop oriented, no signs of metal or mathematical musical notation, less heavy.
As for the input it was more method, the resources, and approach than something like arrangement. He got a level of raw heavy sounding sonics out of us that, while there in the material, stood out more than with someone else. We have recorded some of these songs with another producer and they have a bit more bright epic feel, so the mood is kind of turned on itself.
Is there an overarching concept behind the new EP that ties the record together?

There has to be somewhere. I tend to write in song cycles. Sometimes on a conscious level, sometimes on an unconscious level. We recorded eight songs, and when sorted they were not really sorted by lyrical content – but by aesthetic qualities. Amagosa is darker than Haunted and the songs are little more lengthy overall. The EP is a darker record than our debut LP, and Haunted is somewhere between the two.
Really the ideas in both Eps are kind of binding. It is all there. Memory, mysticism, history of conquest and violence. Many times the songs idea and lyrics are not meant to be a literal translation, but a metaphor for something that is more singularly personal. I tend to leave it to the listener to interpret it and internalize anything. Music is much more interesting when it is up to interpretation than when you are smacked over the head with something very forthright.
Have you begun playing these songs live and which songs have elicited the strongest reaction from your fans?

We currently play the entire EP in our live set. Frankly they are all pretty well received. But we end the set right now with an extended version of “End Song” that uses a big wall of feedback and noise to propel it to the end. It is placed after a number of songs that are more up-tempo so it is is a more “groove” based ending that morphs into a wall of controlled noise. People tend to react very kindly to it, it makes you remember the band live.
(Check out the title track and new single “Amagosa” via SPIN.)