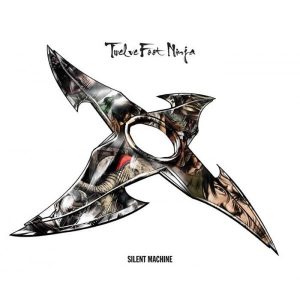 Australia’s Twelve Foot Ninja are currently in the midst of a tour with Periphery, Born of Osiris and countrymen Dead Letter Circus this fall for a MASSIVE run across North America. Fresh from setting a world record for the most amount crowd-funded for a stand- alone music video, tour will mark Twelve Foot Ninja’s first-ever live appearance in the U.S. and Canada for the much anticipated The Tour Is Personal run headlined by good buddies Periphery (see dates below).
The announced dates will cap off an already major year for the young Australian musical genre-benders. Not only did Twelve Foot Ninja sell out the majority of their first headline Australian tour and racked up over one million YouTube hits, but they also supported metal royalty Fear Factory on their recent Oz tour.  In addition to the Periphery seal of approval, other notable U.S. endorsers include Mike Portnoy (Dream Theater/Avenged Sevenfold), Dino Cazares (Fear Factory), Wolf Van Halen (Van Halen/Tremonti) and Jose Mangin (Sirus XM).  On the near horizon, Twelve Foot Ninja have been confirmed to play alongside Meshuggah, The Ocean and Textures at Germany’s Euroblast Festival.
North America is currently getting a double-dose of the band with their explosive live show and an official U.S. physical release of their debut full-length album, Silent Machine, which dropped in October.
Ghettoblaster recently caught up with Twelve Foot Ninja’s Steve “Stevic” MacKay to discuss the debut.  This is what he said about Silent Machine.
When did you begin writing the material for your most recent album?
It is hard to pinpoint a definitive time we started writing Silent Machine. I think some of the first ideas stem back to our second EP, Smoke Bomb, and other ideas where developed in the actual recording process. We didn’t really write/record the album in any kind of conventional way e.g. demo’s, pre prod, studio time. It was more like throwing a jigsaw on the floor then gradually putting the pieces together.
What was the most difficult song to take from the initial writing stage through recording and mixing?  Why was it so troublesome?
Probably “Kingdom.” Kin wrote the track using his iPhone so all of the sounds worked together in a lofi kinda way, but when we started recording the parts with real instruments it wasn’t integrating in the same way – we kind of lost that cohesion from Kin’s demo. I added the ethnic clean guitar part and we all messed with some of the riffs until it became what it is on the album. You can still hear some of Kin’s original iPhone synth sounds in there actually, but yeah, that one took a bit of perseverance.
Which of the songs on the record is most different from your original concept for the song?
Most of the tracks started similar to how they finished up with just more evolved ideas and better execution.
Did you have any guest musicians play or sing on the record?
We did! Our good friend Ben Grayson played keys (Hammond, Piano, Clav, Rhodes, Whurli) and we used some parts from our French mate Tenken, who co-wrote a couple of tracks with us. We’d have both those guys in the band but our car only fits five.
Who produced the record?  What input did that person have that changed the face of the record?
I produced the album. Production happens kind of simultaneously with songwriting a lot of the time in order to realize the genre ideas. Christian Scallan added a lot of expertise mixing the dub and string parts and our good mate Ted from Circles helped us mix the heavy parts. It was an unusual method having two mix engineers with different skill sets but it worked well I reckon.
Is there an overarching concept behind your new album that ties the record together?
The lyrical content (written by Kin) is inspired by the Twelve Foot Ninja story, an unreleased eight chapter allegory. Some of the story can be read in our 72 page graphic novel available from our website.
Have you begun playing these songs live and which songs have elicited the strongest reaction from your fans?
We recently played every song off the album on a national tour of Australia minus “Luna.” Ro and Kin played an acoustic arrangement of “Liberation” which often had the entire room singing with them, that was awesome to experience. People also really dig “Coming For You,” “Mother Sky” (because of the music videos) and we’ve had a great reaction to “Ain’t That A Bitch” as well.
(Dates for Twelve Foot Ninja’s North American tour with Periphery, Born Of Osiris and Dead Letter Circus:
11/04 – Lawrence, KS @ Granada Theatre
11/07 – Chicago, IL @ Mojoes
11/08 – Minneapolis, MN @ Cabooze
11/11 – Toronto, ON @ Opera House – WITHOUT BOO
11/12 – Quebec City, QC @ Dagobert – WITHOUT BOO
11/14 – Montreal, QC @ La Tulipe – WITHOUT BOO
11/15 – Ottawa, On @ Ritual – WITHOUT BOO
11/16 – Worcester, MA @ The Palladium
11/19 – Poughkeepsie, NY @ The Chance
11/20 – New York City, NY @ Gramercy Theatre)