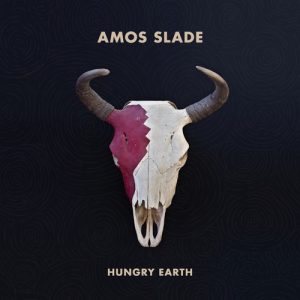 Amos Slade hails from the prairie lands of Flyover County, Sioux Falls, South Dakota.  Appropriately the band’s sound is as gritty and expansive. The band’s debut LP, Hungry Earth, is a singer songwriter’s opus about living life in light of death.  And vocalist/guitarist Nick Engbers provides the band with a platform for experimentation in which they create vast musical landscapes.
Set for release on May 21, Ghettoblaster caught up with Engbers to discuss the LP.  This is what he said about it…
When did you begin writing the material for your most recent LP?

We started piecing things together about a year ago.  We had just completed our first EP, which we wrote, recorded, and released rather quickly.  I think more than anything, that EP was a way for us to figure each other out as musicians.  We didn’t spend a great deal of time on it, and once it was finished we just dove headlong into putting together this full-length.  Our approach throughout the entire process this time around was much more focused and intentional.
What was the most difficult song to take from the initial writing stage through recording and mixing?  Why was it so troublesome?

I’d say “Interstates.”  Just thinking back on the writing stage, it took a long time for us to pull this one together and get it to a place where we were all happy with it.  We messed around with dynamics a lot, because the primary chord progression needed some variance.  It had a tendency to get a little repetitive.  We also went through a bunch of different chorus ideas before settling on the one you hear on the record.  Doing some solid pre-production, and recording a lot of these songs ourselves before we got to the studio really helped move the recording and mixing stage along.
Which of the songs on the record is most different from your original concept for the song?

Again, I’m going to go with “Interstates.”  I actually just listened to my original acoustic demo of this the other day and couldn’t believe how much the song changed.  I remember bringing the original demo to the guys.  We actually started recording it before we jammed it in a rehearsal, which is probably what morphed it so much.  Originally, it was somewhat slow and somber.  Somehow Dan had the foresight to throw that dance-y guitar part over my progression, and then Landon added his choppy bass part…the song took off in a totally new direction.  They deserve a lot of credit for making this song what it is.
Did you have any guest musicians play or sing on the record?

Yes.  Elsa Rae, a Kansas City musician who plays in the band Rooms Without Windows, sings on both “Lunacy” and “Orphans.”  It’s crazy how perfect her voice sounds on these tracks.  Going into to the studio we didn’t have anyone lined up to sing the harmonies on “Orphans.”  I knew I wanted a female, and I had a specific tone in mind.  When I described what I was looking for to Mike, our engineer, he volunteered his step-daughter Elsa, who was only in town for a couple of days.  She came in and nailed the part, so we decided to work her into “Lunacy,” as well.  She has such a unique, smoke-y tone. It’s from another time.
Who produced the record?  What input did that person have that changed the face of the record?

We produced the record ourselves, but also had some help from Mike Dresch at Cathouse Studios.  We kind of each headed up our own instruments, and then sought the groups help when necessary.  Mike was especially helpful in finding specific tones that we wanted but couldn’t nail down ourselves.  Plus, he is the fastest engineer in all the land.
Is there an overarching concept behind your new album that ties the record together?

I would say there is, yes.  The album’s title, Hungry Earth, is taken from a lyric in the record’s closing track, “Orphans.”  “Oh, how the air tastes sweet with hungry earth under my feet.  The end gives the middle more meaning.”  I’d say this is the theme that runs throughout the whole record.  I chose the title and meant it to have a double meaning.  Hungry earth, as in the actual sphere that will eventually swallow us all whole, and then hungry earth, as in the collective people that walk on and explore said sphere before it catches up to them.  I have said that the album is about living life in light of death, and I think that, for the most part, sums it up.  A hungry earth makes earthlings hungry.  It’s an exploration of actual, physical death, but then also about putting certain things to death in order to experience life to the full.
Have you begun playing these songs live and which songs have elicited the strongest reaction from your fans?

We just played a record pre-release show in our home town, and actually played through the record from start to finish.  I think live, “Millions” probably gets one of the best receptions.  It also seems that folks react strongly to “Mara,” which I thought was strange at first, but it is so different from the rest of the set that I can see why it would stand out.