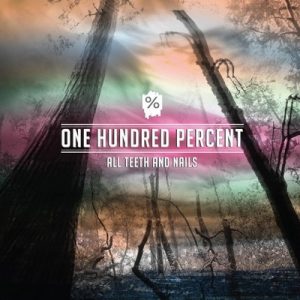 All Teeth and Nails

San Francisco’s One Hundred Percent name Wipers, Dinosaur Jr, Sonic Youth, and Jawbox, among many others, as major influences on their debut full-length, All Teeth and Nails.  Those are some great influences, no doubt, and ones that definitely come across on their new LP out November 9 on 20 Sided Records (Ash Reiter, Trainwreck Riders). But, before we get ahead of ourselves, One Hundred Percent has always been a loud-as-Hell rock band. Graduating from Bay Area acts like The Creeps and Switchblade Riot, it’s no surprise that the three members of San Francisco’s latest buzz-worthy band will bring the noise.
Yet, just being loud is only half the story. What they don’t tell you is just how solid One Hundred Percent is at the heavy, guitar driven, and intensely layered indie rock which they do in fact bring. In one motion, One Hundred Percent can bring up a soaring and hazily sky written shoegaze melody that seamlessly morphs into a searing blitz attack of post-punk percussion, and finally clocks in with a devastating Sonic Youth-esqe freakout.   Since early 2012, the band has been not so quietly perfecting their evocative concoction in and around the city.
Ghettoblaster recently chatted with vocalist/guitarist Matt Habegger.  This is what he told us about the record.
When did you begin writing the material for your forthcoming album?
A few of these songs were started nearly two years ago, as we moved away from doing the smaller EPs. We tend to write at every practice so many songs for us kind of just emerge organically instead of during a specifically-defined writing time. “Freak Crime” is definitely the oldest, though “Grow It” is a close second. We’ve been playing those at shows for a long time now. On the other hand, we finished writing “Lowbar” while we were in the middle of recording the album, and hadn’t actually played it all together as a band until after it was all tracked and mixed.  ?
What was the most difficult song to take from the initial writing stage through recording and mixing?  Why was it so troublesome?

I don’t think there was a particular song that was difficult, but we were able to record and mix our own album, which definitely had its pros and cons. On the one hand, we had practically unlimited time to get things to where we were all happy with how it sounded. On the other hand, we had practically unlimited time to work on it, which meant it was hard to figure out when we could call it “done”. Overall we’re all really happy with how it worked out, since it was more of an experiment than a typical recording and mixing session.
Which of the songs on the record is most different from your original concept for the song?

“Freak Crime” was one of the first songs we ever recorded, not just for this record. It’s on our first EP but in a really different state than it is on the new record. It’s the only old song we re-did for the album but it’s one of my favorites. The old version is still up on our Bandcamp (100percent.bandcamp.com), which you can hear and compare, once the record is out. “Devil in Me” is probably the other biggest evolution, since it started out as this poppy, jangly thing and ended up where it is now.
Did you have any guest musicians play or sing on the record?
No guests. We know a lot of really talented musicians who we’d love to work with, but it didn’t happen this time out. Maybe next time!
Who produced the record?  What input did that person have that changed the face of the record?

We didn’t really think about the producer role until it came time to fill out the credits on our vinyl cover. Ryan (bassist) recorded and mixed the album, so he had a much clearer vision for the final product, which is why he’s listed as producer. He has a good ear and would guide us through takes and different things to try while we were tracking to actually steer the whole thing towards being a cohesive record instead of just a mess of songs. Other than that, the record came together pretty democratically.
Is there an overarching concept behind your new album that ties the record together?

The songs on the record were assembled over a long period of transition for us as we got more serious, switched drummers, and focused more deliberately on our sound. Because of that there isn’t really a guiding concept, though many of them are (abstractly stated) things I want to say to specific people in my life and maybe don’t quite have the guts.
Have you begun playing these songs live and which songs have elicited the strongest reaction from your fans?

We’ve played most of the songs live but we’ve saved a few for our release party on November 9 here in SF. There will definitely be at least one world premiere during our set! Otherwise, reactions vary but “Grow It” is pretty epic live and generally well-received. Also sometimes at the end of “Wade the Creek” it looks like the audience is digging itself out of a brain haze and coming back to reality, which is fucking great.
(Visit the band here:
http://www.weareonehundredpercent.com
https://www.facebook.com/weareonehundredpercent)