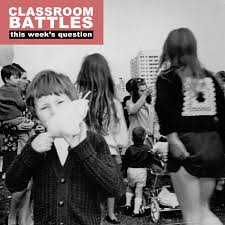 International electro quartet, Classroom Battles released their debut EP, This Week’s Question, in late October. Balancing punchy pop-synths, dreamy melodic arrangements and soulful vocals, the four song offering is a fully musical collaboration that includes members from Ireland, France and The U.S.
After relocating to Dublin in 2011, lead singer Tigrane Minassian met producer/artist Martin Clancy (formerly of renowned indie dance unit The Witness Protection Programme). Shortly after their meeting, they began to collaborate in Martin’s studio.  After the fruitful partnership was established, the duo quickly expanded their line-up adding co-writer/backing-vocalist Trish Kavanagh and renowned engineer/drummer Vasileios Gourgourinis.   Taking the moniker Classroom Battles, the group carved their personal sonic identity by marrying live instrumentation and Ableton software (in which Clancy is a certified trainer).
Ghettoblaster recently caught up with Clancy to discuss the effort.  This is what he told us.
When did you begin writing the material for your most recent EP?
About 18 months ago. Trish Kavanagh and Tigrane Minassian were messing around with some instrumentals I had. After about six months, we realized that we had something but that something had no home. We built a home out of melodies and called it Classroom Battles.
What was the most difficult song to take from the initial writing stage through recording and mixing?  Why was it so troublesome?
From the EP, probably “Contender” had the longest gestation period. I had the tune and a couple of lines (some still remain!) I estimate for about six years! When the other Classroom Battles songs were emerging, this one seemed to have a possible link. But it took a while to figure out exactly how it should fit. Tigrane and Trish really took the song in a more positive direction, and Vasileios Gourgourinis added a more epic tonal dimension.
Which of the songs on the record is most different from your original concept for the song?
“Cross-Eyed Horse.” I wrote the original music with Johnny Cash in mind!
Did you have any guest musicians play or sing on the record?
We did. Conor Brady (Dublin guitarist) guested on three of the tracks. We work the tracks up until we’re pretty happy and then let Conor play, and he adds a different slant and interpretation.
Who produced the record?  What input did that person have that changed the face of the record?
I produced the album. As I write the initial music, I then pass the tracks over and let the input and ideas flow. Often 2/3 interpretations or directions will come up and my role is really to encourage diversity. Vas joining the band really helped to shape up the process as once a song has been demoed it then enters the mixing stage.  Vas is very meticulous, so it’s good to have all the lyrics and arrangements signed off on or there will be trouble from The Greek!
Is there an overarching concept behind your new EP that ties the record together?
Apparently there is, though the concept emerges unconsciously during the recording process. It’s like being a detective uncovering the clues that solves the case. It’s fun in its own way and guides the shaping of the album. Artwork designs (from Tigrane) and the video concepts (Trish) will also guide and shape the music. This is really Trish and Tigrane’s area.
Have you begun playing these songs live and which songs have elicited the strongest reaction from your fans?
“Cross-Eyed Horse” and “Sway” (with the dance moves from the video!).
(Visit Classroom Battles here:  https://www.facebook.com/pages/Classroom-Battles/462255743818862.)