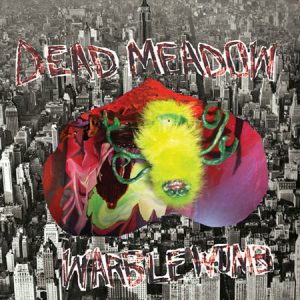 Los Angeles psych-rock outfit Dead Meadow recently resurfaced from a long inner trip.  The Warble Womb LP, which the band released OCtober 7 digitally (physical formats drop November 25) is the band’s first new material since their ambitious LP + DVD project, The Three Kings (Xemu Records 2010). It also marks the first album to feature returning original member and contributing songwriter Mark Laughlin (drums) since 2001’s classic, Howls From The Hills.
The reunited original trio of Laughlin, Jason Simon (guitar/vocals) and Steven Kille (bass) self-produced Warble Womb on their own time with no outside pressure. The result combines the fantasy and mystic rock pop they are known for with elements of other influences peeking through including dub and varied strains of classic rock. Warble Womb is both heavy psych with a groove and the perfect modern “head” album for the resurgence of vinyl culture.
Ghettoblaster recently caught up with Simon to discuss the record.  This is what he said about it.
When did you begin writing the material for your most recent album?
The first songs were written three years ago.   Mark had just rejoined the band but had yet to move to Los Angeles. The first song recorded was “Mr. Chesty”.  This record was a long and slow process of us recording a couple songs  at a time at our own studio.  I feel that over this time Steve, Mark, and I got back to the rapport we had ten years ago (when Mark was last in the band) and vastly extended it in all new directions.   We kept coming up with cool ideas and songs that we felt needed to be on this record.  The last songs were finished just a few months before the release date.
What was the most difficult song to take from the initial writing stage through recording and mixing?  Why was it so troublesome?
Well for me writing and recording is always fun.  Mixing is always tough for me. I like things to be open ended and full of possibilities.  Mixing is decision time.  ” I’m cured” took the most number of tries to get it right. There were so many ways that song could go.  I’m happy with how it turned out.
Which of the songs on the record is most different from your original concept for the song?
They’re all different from any original concepts we may have had.  Most of them start at on acoustic as simple song ideas and like children, you gotta let the songs kinda choose their own path.  I guess “In the Thicket” stayed pretty true to what we envisioned.  We wanted something a bit more punk than we had done in awhile on that one.
Did you have any guest musicians play or sing on the record?
Yes there are a few. I wrote “1000 Dreams” with Imaad Wasif and he plays guitar and sings backup on that song as well.   My lovely girlfriend, Jessica Senteno, plays harmonium on the acoustic number, “One More Toll Taker”.

Who produced the record?  What input did that person have that changed the face of the record?
We produced it ourselves. We’ve never used a producer. We have our own studio and Steve and I spend a great deal of time trying different sounds and ideas. Steve is definitely far more knowledgeable on the technical side of recording and records a number of other bands at our studio.  How the drum mics are set and eq’ed, and how the live takes are tracked is something Steve has developed.
Is there an overarching concept behind your new album that ties the record together?
Not really. Every record seems to have an overarching feel due to whatever we’re digging on at the time and some lyrical themes often unintentionally reappear but we never set out with a definite plan. I know for me any idea of how I feel a record will turn out is drastically altered and reshaped in my mind countless times during the process. Nothing ever turns out how it is imagined…the curse and the joy of the creative process.
Have you begun playing these songs live and which songs have elicited the strongest reaction from your fans?
We’re on tour in Europe and are playing a whole bunch of these tunes. It changes from night to night. “1000 dreams”  is always good. “Mr Chesty” has been especially jammin’ the last couple of nights.  “Rains in the Desert” and “In the Thicket” have also been kicking ass. We’re always changing our set and how we play the songs. It keeps it interesting for us.
(Watch Dead Meadow perform new song “In The Thicket” at Sonos Studio:
http://www.youtube.com/watch?v=Y_Au_YH1MuM#t=10.)