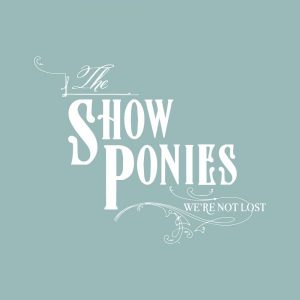 The life of an artist is one that frays the tether to safety and comfort. Yet, it is on this edge of risk that magic happens, and The Show Ponies’ new album We’re Not Lost is proof of the rewards of taking a leap of faith. Funded entirely by crowdsourcing, the album is a realization of both their ardent fan base, and the power of setting a goal and trusting the process. What they’re moving toward is becoming one of the hottest Old Tyme groups out of the West Coast, with a stellar sophomore album that flirts effortlessly with a modern new-roots sound and a hard-driven progressive beat.
Ghettoblaster recently caught Jason Harris, Andi Carder, Clayton Chaney, and Phillip Glenn to discuss the album.  This is what they said about it.
When did you begin writing the material for your most recent album?
Jason – We began writing new material for the album as early as 2011, after we released our first album.  Then again, Clay and Andi might have had ideas for some of the songs way before that.
Clay – I remember Andi had a few verses for “Gone” when Phil was recording the fiddle tracks for our first album.  The title track was written a few months after we finished our first album.   But “Baby, I’m In Love with You” as written weeks before we recorded this album.
Andi – Some of the material from the album had been written and developed from the time we first joined forces to become a full band, and some to less than a week before we started recording. It just took two and half years to come up with enough content that had the chops to justify going for a second album. 😉

What was the most difficult song to take from the initial writing stage through recording and mixing?  Why was it so troublesome?
Jason – “I Regress”, definitely.  We recorded it one way, then completely scrapped it, approached it from a different angle, then tracked it again.  Being that it strayed from a traditional structure, I was always pretty excited about it, but it was difficult to practice.  It’s tough to go into a studio to record a song with limited time when you haven’t had a chance to play it a few hundred times.  That said, after a few fights and throwing of objects, we worked out the kinks, and it ended up being one of the coolest songs on the whole record.
Phil – I think “I Regress” was definitely the problem child of the record. It was a tune we wanted to take shape more in the studio rather than through live shows, and I think because of that we had pretty different ideas of where it should go. We must have recorded 3 or 4 different arrangements before we got something everyone was on board with. Thankfully we’ve all got pretty thick musical skin and working through those creative differences helped to make the product better rather than causing serious band drama.

Which of the songs on the record is most different from your original concept for the song?
Clay – Some of us were tempted to abandon “Brother, Do You Love Her” because the original version had so many weird issues with time signatures changing in odd places.  It also had more of a slow rock feel to it that didn’t work for us, but thankfully the melody turned out to be pretty versatile and we finally got though a few weird versions of the song until it became what it is.
Phil – “Brother Do You Love Her” went through a bunch of different iterations. It started more as just a pop song, then at some point we thought it would be cool to toss a fiddle tune in and make it more newgrass (which the next day we decided was a very bad idea). It finally took me learning clawhammer banjo for the song to have the right feel.

Did you have any guest musicians play or sing on the record?
Jason – Yes, David Burrows on Double Bass and Sarah McGrath on Cello.  Both awesome musicians and even better people.
Clay – If you listen closely enough, you will notice that all of Clay’s lyrics are doubled with a slight whisper very low in the mix.  The whisper was recorded by Alvin Andrews, a man who proposed to Clay’s mother before she decided to marry Clay’s actual father, Todd Chaney.  The purpose of the whisper is to remind the listener that every choice has a profound effect on the world.  Had Clay’s mother married Alvin Andrews, Clay would have never been born, The Show Ponies would have never formed and an entirely different set of offspring would have been created. (haha)
Andi – David Burrows is basically an honorary Show Pony. The lovely Sarah McGrath on cello as well.

Who produced the record?  What input did that person have that changed the face of the record?
Clay – Jason Harris, our guitarist/banjoist is also our producer.  It is nice to have an outside voice, but I feel like that outside voice was fulfilled by our engineer, Ryan Hafer and various people who were in the studio during recording.  I feel like we can be more involved in the material with Jason as the producer and not have to trust that some dude with an impressive resume knows more about our own music than we do.  Jason has more of a connection with the music as he is also involved in the writing process when the songs are in young stages of development.

Is there an overarching concept behind your new album that ties the record together?
Jason – The paradox of having a pretty good idea where we’re supposed to end up but having no clue what’s between you and the final destination is one I think we all experience.  It’s what gives the five of us this absurd and, at the same time, rational notion that we’re not just random agents of movement and location, but that we’re moving toward something.  “We’re Not Lost” is our attempt at expressing our small place in a big confusing world.
Andi – Life. The unpredictable ups and downs, and it’s all composed into stories that are uniquely relatable.

Have you begun playing these songs live and which songs have elicited the strongest reaction from your fans?
Jason – Yes.  The best reactions we’ve received from fans thus far are for the songs “Baby, I’m in love with you,” and “Whiskey and Wine.”  Everyone always loves the fast ones.
Clay – We’ve been able to play all the songs live, although we’ve had to make a few alterations to some of them to accommodate  our standard live instrumentation.  People tend to like fast stuff, so “Baby, I’m In Love with You” is a hit, but it means more to me to get people to quiet down for a few minutes and listen to the slow down at the end of “Brother, Do You Love Her?”
Phil – It’s so exciting to finally get some mileage out of our new tunes at live shows, and I think “Baby I’m in Love With You” is probably a fan favorite. Speed is an important element of the energy of this type of music, and that tune is definitely a barn burner.
Andi – Yes. Well, our fans had heard a few of the songs at shows before we released the album, so even though they dig the new tunes, they definitely get jazzed when we play tunes like “whiskey and wine” and “Choppin’ wood” because they can sing and hoot’n’hollar along.