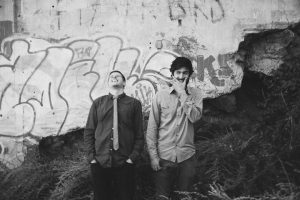 Dreamtigers is the songwriting collaboration of Jake Woodruff and Andrew Gary. Their nostalgic, dynamic and folk-tinged indie rock songs take shape through many rounds of mutual revision, drawing on nearly a decade of collaboration to create a sound at once new and familiar. It’s the sound of New England troubles, over a beer with a friend.
Wishing Well, their debut LP, is the first in-depth realization of Dreamtigers’ vision. Joe Longobardi and Mike Moschetto are valuable new additions to the lineup. Longobardi, who plays in Defeater with Woodruff, lends his drumming expertise to the outfit, at times explosive and always tasteful. Moschetto engineered the bulk of the tracking and now lends his bass chops to band. A slew of guest appearances, including members of Caspian, Balmorhea, and Polar Bear Club, make this a record not to be missed.
To date, Dreamtigers has shared the stage with O’Brother, Daylight, Defeater, Caspian, Tigers Jaw, Aisha Burns, and many more acts throughout the U.S. Catch them supporting Wishing Well in 2014 with a melodic and impactful live performance.
Ghettoblaster recently spoke with Woodruff about the LP, which dropped February 25 via Broken Circles.  This is what he told us.
When did you begin writing the material for your most recent album?
Some of it has been in the works since 2010, but most came together over the course of 2012, and we started tracking early 2013.
What was the most difficult song to take from the initial writing stage through recording and mixing?  Why was it so troublesome?
That depends on how you look at it. I think the most troublesome was a song that ended up being a b-side.  We’ve recorded it four times since 2010.  Still not really sure what to do with it, but we’re really happy with how it turned out.
Which of the songs on the record is most different from your original concept for the song?
We did a lot of demo recording before the final tracking, so most of the kinks were worked out before we went into the studio.  I think “God Damn My American Heart” surprised us with how weird it got, but also with how cohesive it came together.
Did you have any guest musicians play or sing on the record?
Oh yeah.  Here goes: Jonathan Ramey played piano and rhodes, Aisha Burns from Balmorhea played violin, and Cal Joss from Caspian played pedal steel.  We didn’t have a permanent bass player during tracking, so Tyler Smith and Chris Browne from Polar Bear Club lent a hand with a few songs.  Mike Moschetto, who engineered most of the tracking and plays bass with us whenever he’s home, played organ on a bunch of songs.  Colin Bugbee sang backup vocals.  In short, we had a lot of help.
Who produced the record?  What input did that person have that changed the face of the record?
We produced it ourselves. Mike had a lot of good input, though.
Is there an overarching concept behind your new album that ties the record together?
It’s definitely not a “concept album. We just wanted to write a bunch of really personal songs that we liked and see which ones fit together on a record.  There are themes that tie the songs together, from our personal concerns or hopes or neuroses or struggles, but no overarching concepts.
Have you begun playing these songs live and which songs have elicited the strongest reaction from your fans?
As of now we’ve only played the first four songs, and “The Smoke and Low”.  The reactions have been really positive overall, but I think the most surprising for us is how positive the reaction for “The Smoke and Low” has been.  That was a bit of a departure for us, and it’s fun to see how people hear different influences in that song and describe it in ways we never would have thought of while writing it.
(Visit the band here: www.facebook.com/dreamtigersmusic.)