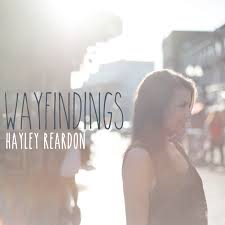 In a time when adolescents with dreams of record deals and fame dancing inside their maturing heads are encouraged to wait in long lines for days in a cattle call for the likes of The Voice and American Idol, Hayley Reardon’s journey began as organically as the local New England music scene wherein she finds her inspiration and creative home.
Her Wayfindings, which dropped March 11, is remarkable in its mature approach coming from an artist barely old enough to drive herself to gigs. An emotional and creative leap forward from her 2012 debut Where The Artists Go, such highlights as “Numb and Blue”, a wryly sincere kiss-off to an ex with lines like “It’s the way you drive and all the Bob Dylan you pretend to like” and an excellent cover of the Henry Thomas folk standard “Fishin’ Blues” have far more in common with Patty Griffin or Lucinda Williams than many of today’s young pop singer/songwriters, boasting a lyrical and melodic weight far beyond Reardon’s years.
This new EP also showcases an edgier sense of adventurousness in where Reardon allows the music to take her songs. Bolstered by the time she spent at Folk Alliance International 2013 in Toronto, Canada, the songwriter has obviously sought out new approaches and it is paying off in spades.
Ghettoblaster recently caught up with Reardon to discuss the EP.  This is what she told us about it.
When did you begin writing the material for Wayfindings?
Some of the songs on Wayfindings had been kicking around for a while since my last record and some were written just before or even after we were underway with recording. Setting out, our goal with this project was really just to get down some new songs, and as always, even newer ones ended up coming to life in the process.
What was the most difficult song to take from the initial writing stage through recording and mixing? Why was it so troublesome?
I’d have to say “Folded Maps.” It’s a quirky little song that for whatever reason I really stalled out on writing after the first verse and chorus. It didn’t feel like there was anything left to be said, yet the song still felt incomplete. We were recording at Lorne’s home studio in Connecticut one day and I played what I had of “Folded Maps” while warming up and setting our levels to record some other tunes. Lorne saved the take and after later digging it up we both agreed that that specific recording had a certain quirky charm that matched the song perfectly. Because we were set on using that take, things got tricky later when we needed to add an ending on but we made it work!
Which of the songs on the EP is most different from your original concept for the song?
Probably “Make Some Good.” It ended up being one of those songs that shaped itself and really led me to its meaning more than I led it. It started out as a diary entry about my own confusion, but ended up focusing in on a specific summer I spent in Boston and left me with a simple answer to all of my questions: take the good you’re given and go create more good – which was a much more uplifting theme than I had started out with!
Did you have any guest musicians play or sing on the record?
Yes! We were lucky to have a stable of really talented musicians helping to bring these songs to life. The tabla/cello combination is pretty prominent on the record, the tabla being played by Grant Smith and the cello by Eden Rayz. Kevin Barry brought something really special with his dobro, National slide guitar, and twelve string parts. Lastly we had Jesse Williams on bass who really made tracks like “Booze and Blueberries” and “Say What You Mean.”
Who produced Wayfindings? What input did that person have that changed the face of the record?
Wayfindings was produced by Lorne Entress. If there’s one thing Lorne knows how to do best, it is make my songs shine. I wanted to explore a sound that was a bit more intimate and stripped down, while still giving the songs life and energy and Lorne got really creative in finding ways to do that.
Is there an overarching concept behind the music that ties the songs together?
Not so much. With my last record, Where the Artists Go, I had a very specific concept that for me folded every song into an overarching theme. With this one, however, the goal was really just to take a different approach to this different batch of songs and see what comes of it.
Have you begun playing these songs live and which songs have elicited the strongest reaction from your fans?
Yes these songs have definitely worked their way into my live show at this point. I’d say that “Numb & Blue,” “Booze & Blueberries,” and “Fishin’ Blues” have received the strongest reaction to date.
(Visit her online here: http://www.hayleyreardon.com/.)