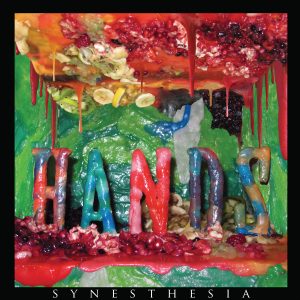 Hands makes music like a rip tide, swirling in overlapping loops and riffs, slowly enveloping you. The group’s members – Geoff Halliday, Ryan Sweeney, Sean Hess and Alex Staniloff – craft their hypnotic sound from a single dropping note that builds into a reverberating roar that crashes over you like a wave. It’s a mesmerizing trick that they pull off on their debut LP, Synesthesia. Building off the success of their Massive Context EP (Small Plates) released in 2012 and a 7” released on White Iris in January, Hands moves from rock to synth-pop to skyrocketing stadium anthem, often within the same song.
Ghettoblaster recently caught up with Hands’ Geoff Halliday to discuss their debut.  This is what he told us about Synthestesia, which drops via Kill Rock Stars on April 30…
When did you begin writing the material for your debut album?
Most of the material was written over the last year and a half. We wrote one song almost completely in the studio and then there was one that we built out of a project started in 2008 before we even formed the band.
What was the most difficult song to take from the initial writing stage through recording and mixing?  Why was it so troublesome?
I’d have to say a tossup between “Videolove” and “Lonesome Body”. The original intro to ‘Videolove’ was started in ’08 and then abandoned until sometime in the last year when we stumbled upon it while peeling through old Logic files. It started as a much more electronic arrangement which made making the decisions as to how we could turn it into an actual Hands song much more difficult. Deciding which parts to strip out and how we could add our own new instrumentation to it. I think it turned out ok though. “Lonesome Body” was one that came together really late in the game lyrically, so I think it was tough to really picture it as an album song when I was having such a hard time getting the vocals together.
Which of the songs on the record is most different from your original concept for the song?
‘Take It All’ was really pieced together in the last few month or so before we started tracking so it was being rewritten and toyed with right up until we closed the project for the last time. It felt a like a really drastic change when it transformed from demo to tracking to ultimately mixing and mastering at a far quicker pace than any of the other songs.
Did you have any guest musicians play or sing on the record?

We didn’t have any guest musician’s but we were fortunate enough to have a lot of really nice friends lend us gear for the recording so that was really great.
Who produced the record?  What input did that person have that changed the face of the record?

We self-produced the album and had it mixed by Alex Aldi who was so instrumental in helping us get the sounds we were chasing after. Instead of going to a traditional recording studio to track the record we were fortunate enough to have our bassist’s grandmother vacate her lovely home in the San Fernando Valley. We turned it into a makeshift recording studio with a combination of our own, rented and borrowed gear and spent the next 3 weeks tracking before a few more weeks of overdubs and edits.
Is there an overarching concept behind your new album that ties the record together?

There are a lot of opposing themes that populate the album, especially songs where the music and lyrical content are contrasted to each other. I think it’s something we all feel as guys in a young band, and probably most people feel in general. The sense that things can be quite simultaneously completely OK and terribly discomforting depending on your perspective.
Have you begun playing these songs live and which songs have elicited the strongest reaction from your fans?
We played a good amount of these songs live before recording which I think really helped inform the tracking process. “The Game Is Changing Us” tends to elicit some dance action, which is always really nice to see.