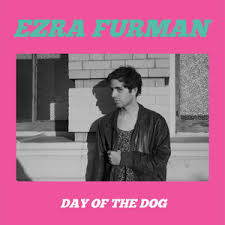 Day Of The Dog

Following hot on the heels of the first CD release of his solo debut The Year of No Returning, Oakland resident Ezra Furman is issuing Day Of the Dog, his second solo effort after a fruitful five year/four album stint leading Boston’s Harpoons.  The album sees Furman progressing from the dark chamber pop and balladry of his solo debut and emerging as a pulse-quickening rock provocateur. Throughout the album, there is a sense of bold ambition and grand artistry in the tradition of songwriting giants of the past, but set apart by an undercurrent of deranged, ragged glory.
Ghettoblaster recently spoke with Furman about the record, which was released by Bar/None in October.  This is what he said about it.
When did you begin writing the material for your most recent LP?
When we finished mixing the last one. Once an album is done—signed, sealed and delivered—my brain always explodes with ideas for things that could have been on there that would have made it better. So I came up with a lot of the new songs before the last record was even released. The one exception is the leadoff track, “I Wanna Destroy Myself,” which was written mostly in college, years ago. Somehow I never saw its potential until I revisited it recently.
What was the most difficult song to take from the initial writing stage through recording and mixing?  Why was it so troublesome?
“Been So Strange” has no recognizable pattern of when things are repeated and all that. The specifics of its structure make no sense. I just knew when things should happen in the song, kind of on instinct.  So it was really hard to teach to the band. We ended up just recording a drum beat for a while, over which we overdubbed everything else one at a time. Turned out perfect.
Which of the songs on the record is most different from your original concept for the song?
“Cherry Lane” used to sound entirely different, like a soft little folk song. Ultimately I didn’t want to be a quiet little folk singer on this record, so we put it through a ton of versions and almost threw it out before we perfected it. I’m glad we persevered. It’s the first song I’ve released where I don’t play any instruments.
Did you have any guest musicians play or sing on the record?
Patrick Burke played upright bass on “Tell ‘Em All to Go to Hell” and “Walk On in Darkness.” He’s not really in the band but he plays a mean upright.
Who produced the record?  What input did that person have that changed the face of the record?
Tim Sandusky produced and played the saxophone. His impact is incalculable. He knows when to mess with stuff and when not to. He knows when to get drunk and when to stay sober. He understood the goals of the project: to fuck things up a little, to display the passion and the fun of it all.
Is there an overarching concept behind your new album that ties the record together?
Yeah. Being dissatisfied with the way things are. And getting all worked up about it.
Have you begun playing these songs live and which songs have elicited the strongest reaction from your fans?
We’ve played nine of the thirteen album songs live. It’s hard to choose which one comes off the best when they’re all so fucking baller. I like “Walk On in Darkness” for the simultaneous gloom and nervous energy with which it fills a room, plus the killer sax solo by Tim.