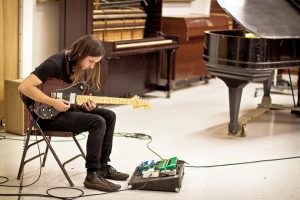 Composer, performer, and multi-instrumentalist Dustin Lovelis has been busy crafting songs in his coastal birth town Long Beach, California. Since Dustin’s late teens, the god-son-of-grunge has toured the globe with a myriad of musical outfits, including The Fling (Dangerbird Records) as primary vocalist and songwriter. Taking a break from touring and the music business, The Fling went on hiatus with no concrete plans to continue. Fortunately for his fans, Dustin couldn’t stop writing songs and returns with an ambitious debut solo effort Dimensions, released on Porch Party Records on May 19.
Dustin’s music is drenched in textures both vintage and modern, while his fine-tuned pop-sensibilities rise out of whichever era ignited the inspiration. After The Fling dissolved, Dustin took over all writing responsibility. With a guitar, a microphone, and a bottle of whiskey, Dustin found his way through his influences and pinned his own demos to a multitrack. Without any input from band members, Dustin meticulously created his new DNA of sound with hints of The Everly Brothers, The Pixies, and The Beatles. He knew it was time to return to the studio.
Dustin recorded Dimensions at Elliott Smith’s former music home New Monkey Studios. He found the ideal compliments for his timeless sound with an insane amount of gear and incredibly talented musician friends. Elijah Thomson of the band Everest played bass and produced the album, and prolific composer and session player Frank Lenz lays down his dynamic drumming with classic fills. After two days, the basic tracks were finished. A few more instruments and vocals were added, and Dimensions was complete.
Ghettoblaster recently caught up with Lovelis to discuss the record. This is what he told us.
When did you begin writing the material for Dimensions?
Over the past couple years.  I had a few songs floating around already.  I’m constantly trying to write.  Sometimes I get a songwriting spurt and complete songs just fall on my lap.  Sometimes I am constantly butting heads with just one song.
Which of the songs on the LP is most different from your original concept for the song?
I added a layer of synth on the whole record.  That was kind of a last minute decision.  I borrowed a Moog Voyager from my friends Highlands (Long Beach), and just locked myself in my room manipulating sounds that eventually found their way into the songs.  Other than that all the songs on the LP stayed pretty true to the original demos.  They just sound better sonically.
What was it like recording in New Monkey Studios? Are/were you a fan Elliott Smith’s music?
Yeah I have always been a big Elliott fan.  Especially his last 3 records.  Some of which he recorded at New Monkey.  There was something pretty inspiring about being able to play instruments that he has played on songs I love.  There were people in and out of the studio constantly and I heard a lot of Elliott stories first hand.  It was pretty rad.  Also, the Neumann mic I used for most of the vocals had a piece of masking tape on the box with his full name written in sharpie.  You don’t see that everyday.
You used to front Long Beach band, The Fling. How does this stuff differ? Is The Fling over, as a band? Or might there be a return in the future?
I have definitely matured as a songwriter since The Fling days.  Everyone in that band has.
The big difference is only having one songwriter for the record.  I think it makes the music a little more cohesive.  The record makes more sense in its entirety.
The Fling never really broke up.  Everyone just got too busy.  We toured too much and always came home broke.  We all just got burned out and started feeling the “i’m too old for this shit” creeping in.  So we all just walked away.  We’ll come back if there is a demand for it.  For now I am just looking forward.  Not gonna beat a dead horse, again.
Do you have any plans to tour the states this year?
Yes.  I want to hit the road as soon as possible.  Hopefully by summer.
(Visit Dustin Lovelis here: https://www.facebook.com/dustinlovelismusic.)