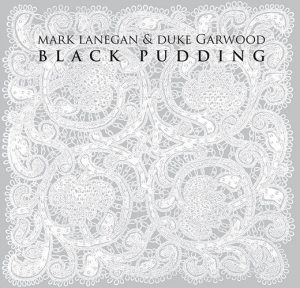 Mark Lanegan and multi-instrumentalist Duke Garwood recently teamed up to release Black Pudding via Ipecac Recordings on April 16.  Lanegan, never one to shy away from unique collaborations, and Garwood has often been described in the UK press as Lanegan’s “spiritual cousin across the Atlantic waters.”  He is praised in his home country as a master bluesman.  Black Pudding was recorded at Pink Duck Studios in Burbank, Calif. by Justin Smith (Tegan and Sara, The Hives) and mixed by his Queens of the Stone Age associate Alain Johannes.
Ghettoblaster recently caught up with Garwood for a short chat about the album.  This is what he said about it…
How did you and Mark Lanegan begin working together? When did you decide you’d like to do a full album together?
I toured with The Gutter Twins throughout 2009 and around that time we decided to make a record. The writing began the same year.
What was the songwriting process for the album?  Did you and Mark co-write the songs or did he write some and you write others?
I wrote and recorded ideas and sent them to Mark, he picked the ones he liked and we took it from there.
How long was the actual recording of the album?

About two weeks.
What was the most difficult song to take from the initial writing stage through recording and mixing? Why was it so troublesome?
Only “Sphinx” was quite difficult to record and that was because the guitar part is very complex, but it all came together beautifully in the end.
Did you have any guest musicians play or sing on the record?
Alain Johannes plays a wonderful mellotron melody and a very magical guitar part on one of the tracks.

Who produced the record? What input did that person have that changed the face of the record?
The record was engineered by Justin Smith, a legend. Mark and I produced it.
Do you anticipate a US tour behind Black Pudding?
Time will tell.