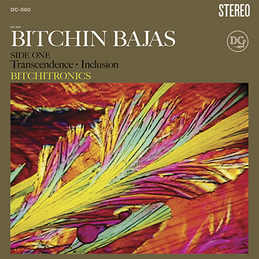 Since their first appearance all those years ago in 2010, Bitchin Bajas approach has been simple – unfold tones via synth and keyboard, allowing micro-frequencies to press against each other in a way that pleases the ear, the mind and the soul. Bitchin Bajas are set to strike again with their new album, Bitchitronics, out July 16 via Drag City.
Basic recording of Bitchitronics was done in, all over and around a house in Fennville, MI with three tape machines reeling in the sounds – which meant that sometimes, in addition to synthetic sounds that have never seen the light of day, you’re also hearing the actual sound of the light of day on the tape (or when recorded at night, evening stars). Two 1/4″ tape machines were utilized to make loops and execute the Bitchitronics sound system, one which discreetly captured the combined sounds of the loops with live playing. Once done, it was back to HQ where edits of the 1/4″ recordings were utilized to create larger tapestries on the 2-track master tape.
Cooper Crain from Bitchin Bajas (also CAVE) answered some questions Ghettoblaster had about the release while preparing for their album release party at Constellation (Chicago).  This is what he said about it…
When did you begin writing the material for your most recent LP?

August of 2012, Dan, Rob and myself went to Fennville, MI with our equipment and spent four days recording.  Everything was written and recorded right there on the spot.  Editing and mixing was done later in Chicago, IL.

“Inclusion” was several takes overlapped editing each one in and out, sometimes all in at once. We had a general idea of what we wanted, but the flow of the track wasn’t there from the beginning, just the idea was. We did some minor overdubs and mixed it how we thought worked best, but it definitely was difficult since it was improvised during the recording and orchestrated later during mixing.

Each track was specifically design in the end to suit the concept we had from the beginning, so nothing conceptually came out different.

Jim Becker plays guitar on “Transcendence”.
Who produced the record?  What input did that person have that changed the face of the record?
Bitchin Bajas produced the record, we adjusted whatever feeling it needed when needed.  In the past some records have just been me, but this time it was all three of us putting in ideas for how we wanted everything to sound.

We weren’t trying to rip anyone off exactly, but we wanted to use several tape recording techniques that have been used before.  Using the machines as an instrument as well as a creative tool for recording.  Its called Bitchitronics, if that’s not enough of a hint, then well…

Because of the process we used to write and record this record, it’s been hard to play more than one or two live, and they vary from the recordings for sure.  For the record release show on July 12 at Constellation we are putting together a larger ensemble of musicians to help fill out the sound that we created on the record.  We will be playing Bitchitronics in its entirety for the first and probably only time.