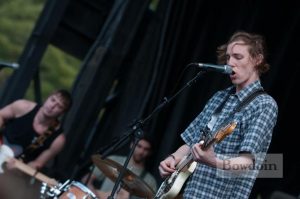 Citing influences from Radiohead to Alt-J, Portland, Maine’s indie rock four-piece Phar\os brings classic indie rock vibes to the table with their debut release, The World Unfolds and I am Falling Under, set to be unveiled November 5. With studies in music accenting their songwriting pedigrees, Phar\os music is carefully constructed with attention to texture and timbre.
Ghettoblaster recently caught up with Phar\os guitarists and vocalists Connor Smith and Dave Raskin to discuss the record.  This is what they told us.
When did you begin writing the material for your most recent album?
Dave and I played in a different band freshman year of college (I won’t mention the name…), and some of the ideas originated around then. It wasn’t until our senior spring that we had developed our compositional muscles enough to finalize our ideas into coherent structures. (Connor Smith)
Most of the material was written within a year of the time that we sat down to record.  A couple of the tracks, though, have been being written and rewritten for years, and only now felt ready to be laid down on an album. (Dave Raskin)
What was the most difficult song to take from the initial writing stage through recording and mixing?  Why was it so troublesome?
It took many tries to record the synth-sounding chords in “Runaway”. I think what you hear in the recording is a combination of Dave and my separate attempts at capturing the sound. It was also the first one Chris (Watkinson) mixed, and it took us the longest time to nail down the sound we wanted. For all of the songs though, Chris was given the considerably sizable task of making something manageable and clean out of a dense stack of tracks; I think the final product really speaks well to his talent in this profession. (CS)
For me it was “Sapphirize.”  Even though it’s not our most densely layered song, it was kind of a nightmare to record.  Capturing the tones I normally played live on that song failed to make the recorded version pop; it all sounded very flat.  So I had to record and re-record the same parts with a ton of slightly different equalization settings, amounts of reverb, etc. before I felt like we had a texturally dynamic song. (DR)
Which of the songs on the record is most different from your original concept for the song?
Hmmm, well “Sapphirize” is a much more polished version than we were ever able to pull off live. “Wide Eyes” got the same treatment.  The Wanderer really took on a life of its own in the studio, and we hoped that that was going to be the case with this song because we didn’t have as solid of a mental concept for it. The final result is a good mixture of parts that took months of re-writing and parts that were conceived minutes before tracking in the studio. (CS)
“Wanderer”, maybe?  That song stemmed from a kind of spontaneous jam between Connor and I way back in 2010.  We both brought in some parts that we’d previously written and realized that they were dying to be a part of the same song, and that was the beginning of the “Wanderer”.  It was pretty stagnant for a while, there, but, especially once Rami (Stucky) and Simon (Moushabeck) came on board, it started to shape itself into the piece we recorded. (DR)
Did you have any guest musicians play or sing on the record?
No.  Everything was written, performed and recorded by the four members of Phar\os. (DR)
Who produced the record?  What input did that person have that changed the face of the record?
No external person produced the record. Dave and I did just about all of the writing, and we worked with Chris a lot to create unique sound. It was important for us to give him a lot of freedom to experiment, and I think he did so in a very tasteful manner. (CS)
The record was largely produced by Connor and myself.  That said, our friend Chris Watkinson, the audio engineer tasked with mixing the record, did give us some insightful feedback that we took to heart, and that led to some really cool changes in the record – mostly small changes to ease the transition between sections, or allow for a greater release of energy in a particular section. (DR)
Is there an overarching concept behind your new album that ties the record together?
Yes and no. No because it is not remotely a concept album, and the lyrics were written separately from each other. Yes because Dave and I were experiencing similar emotions, obstacles, and other scenarios that led to the bulk of the lyricism. Even though we each had a very separate perspective on those events, we often have similar reactions to the world around us. That’s always been a factor that ties us together and I think it applies to the record as well. (CS)
Have you begun playing these songs live and which songs have elicited the strongest reaction from your fans?
We actually played them live a bunch at college before beginning the recording process. The songs that seemed to be most people’s favorites were “Sapphirize” and “Tumbler.” (CS)
We’ve performed all of them live.  Lots of people have approached me with positive feedback about “Runaway” after shows.  That said, when I occasionally open my eyes on stage, I notice people moving to “Sapphirize” in a more active and profound way than the kind of hypnotized swaying that “Runaway” elicits. (DR)
(Visit the band here: https://www.facebook.com/pages/Pharos/443667859041702 and at http://www.pharosband.com.)