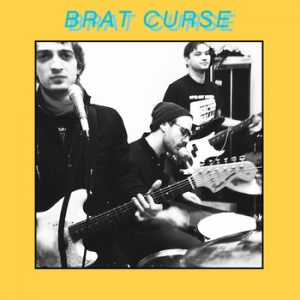 Columbus, Ohio indie rock trio Brat Curse came together by chance, but stay together by sharing thier significant interests: drinking, Terminator 2, Tecmo Bowl, swimming pools, smoking bowls, popping ollies and mollies…and making memorable rock music.  Their latest self-titled EP is a fuzzy, melodic, poppy record that shows off their propensity for creating hooky, memorable, noisy and rock that straddles the borders of punk, indie, and rock and roll in familiar and fantastic ways.
Ghettoblaster recently caught up with guitarist/vocalist Brian Baker, also of Astro Fang and Smug Brothers, to discuss the delightful record, which shows the band have as much in common with Baker’s self-admitted vocal hero Lou Reed as they do Superchunk, Pavement, and The Pixies.  This is what he said about it.
When did you begin writing the material for your most recent album?
Most of the songs were written in early 2013. Some of them were older demos of mine that were written in 2012.
What was the most difficult song to take from the initial writing stage through recording and mixing? Why was it so troublesome?
We actually blew through the tracking for the album pretty quickly. We had a pretty good idea of what we were going to do before we went in. We recorded with Ryan Dixon at his basement studio Black Disco Ball, with whom we’ve worked with many times before, so everything went very smoothly.
Which of the songs on the record is most different from your original concept for the song?
They all turned out a little different than we expected on the album. Things changed compositionally, and the lyrics changed quite a bit. We all enjoy recording, and it was fun to breathe a little bit of fresh air into the songs, as we had been playing them live for a little while.
Who produced the record? What input did that person have that changed the face of the record?
Again, Ryan Dixon recorded the record in his basement. We have been recording with him for a long time. His input is very valuable because he knows the sound that we want, and what he needs to do to achieve that sound. He also has a fleet of synthesizers and various other strange instruments that always manage to make their way onto our recordings.
Is there an overarching concept behind your new album that ties the record together?
Like a Jethro Tull album or something? No. We had just had intentions of making a straightforward, stripped down rock and/or roll album.
Have you begun playing these songs live and which songs have elicited the strongest reaction from your fans?
We have been playing these songs live since before we started recording. I’d say that the most crowd pleasing, hype song would be “Over and Over” or “Sunny Outside.” A lot of people know the lyrics to Sunny Outside, and sometimes sing them more accurately than I do.
(Do yourself a major heavy and check out the record here: http://www.bratcurse.bandcamp.com.)