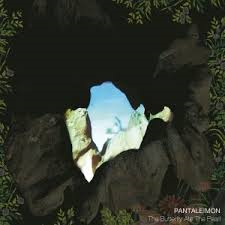 The Butterfly Ate The Pearl

The Butterfly Ate The Pearl is the fifth album from England’s Pantaleimon, aka Andria Degens.  She’s a somewhat idiosyncratic, self-taught, intuitive multi-instrumentalist, singer and songwriter; who in the past has been a frequent collaborator with Current 93.
The new album features nine new original tracks, including the download video singles “If I (Was)” and “Ember.”  The Butterfly Ate The Pearl was written and recorded during 2011/12 in her home studio, and co-produced with Hugo Race (Nick Cave & The Bad Seeds/Fatalists) and is being released by Grass Girl Music.
Ghettoblaster recently touched base with Degens about the record.  This is what she said about it.
When did you begin writing the material for your most recent album?
The initial writing happened gradually, as it usually does. First song which came was “If I (Was)”. Sketches of some of the other songs were also there.  I was still married then. Then everything began to unravel in my life – nowhere to live, no job, no nothing. This was 2010/2011. But my friends, they pulled me out from a very dark place. I found a tiny cottage right looking over the ocean and set up a basic, but perfectly functional studio in its damp basement. Got myself a part time job in the local whole food cooperative, and then kept my head down working through the nights and early mornings in my studio for the next 18 months – living like a hermit focussed on writing and recording, fuelled by a daily yoga practice and dark chocolate.
What was the most difficult song to take from the initial writing stage through recording and mixing?  Why was it so troublesome?
I’d say “Ember” was the most tricky, due to the vast number of tracks for that one song. It was one of the main reasons that I decided to go into a big studio in the end to mix and produce. I was way over my head technically to handle that amount of sound files and needed some extra help. Hugo Race was always there from the beginning of the project and our initial idea was to mix the album over the internet (as he is based in Melbourne), once I’d finished tracking at my home studio. I regularly sent him rough drafts of the songs over the time I was working on it, but it soon became apparent that we needed to be in the same space at the same time to bring this album into its brightest light. We eventually came together in Italy at Franco Naddei’s Cosabeat Studio and it was a revelation to hear the songs in the vast open space of the Italian countryside, after creating them in a dark damp basement.
Which of the songs on the record is most different from your original concept for the song?
Again, I’d say “Ember”. Its original title was “Firewalk”. The lyrics were slightly different and the melody line was way different. When I began tracking this song I changed it all around.  “Diamond River Run”, which I co-wrote with Polo Piatti, is another one that changed quite radically, but this time in the mixing process.
Did you have any guest musicians play or sing on the record?
Yes quite a few friends came in for this album. I’d recorded the major part of each of the tracks, including most of the vocals. Then the album just seemed to grow organically, picking up it’s own momentum, attracting the attention of like-minded souls. Will Oldham introduces the track “Morning Star”; Jay Darlington played piano, Moog, Mellotron, Farfisa, Hammond organ. I originally asked him to play on one track, but he loved the music so much he ended up on three. Then there’s James Blackshaw (guitar, bass, organ), Otto Hauser (drums), Steve Finnerty (guitar), Dan Price (bass), Paul Phillips (slide guitar), Andrew Liles (treatments), Polo Piatti (piano), Robin Casinader (violin), Franco Naddei, and of course Hugo Race (guitar, string arrangements).
Who produced the record?  What input did that person have that changed the face of the record?
Hugo Race and I co-produced the record. We’re pretty attuned to each other sonically, so he was able to accentuate the cinematic and psychedelic quality that was inherent in the material I presented to him. He added a huge amount to the production. It would not be the record it is without his input. We all lived and worked together long hours at Cosabeat Studios for a week and that kind of intensity and focus, brings about a symbiotic relationship, which produces pretty cohesive results. It was a magical time.
Is there an overarching concept behind your new album that ties the record together?
The record is a travelogue happening inside my head, moving over differing terrains, reflecting differing emotional and physical states. Transformative states for the most part. Ironically I was just in California travelling through some incredible natural terrain in the most gorgeous of lights (David Lynch is so right when he talks about the quality of light in that part of the world) and it suddenly dawned on me that I was actually on a pilgrimage to every landscape that had inspired the album, even though I’d not physically been to any of them until that point – a year after completing the album. I now think my spiritual home is in California.
Have you begun playing these songs live and which songs have elicited the strongest reaction from your fans?
Not yet. There are plans for live shows this coming Spring. So I’ll let you know how it goes.