In a world where experimental electronic music exponentially splinters into a multitude of rogue genres that slowly shuffle the globe from demilitarized dance floors to sleeper cell bedroom studios and back, a team of disparate scientists tracks this solanum-like pandemic while desperately trying to interpret cryptic field recordings of Samhain’s past, not one day at a time, but from Amen to Zombie…
ZOMBIE
Somewhat of a departure from our modus operandi, but still apropos I think.  This time of year is when a very special radio station WFMU holds their annual pledge drive.  If you’re familiar with the station get off your butt and give up some cash.  They are, I think, the longest running independent, community-run radio station in the country, and at the very lease the oldest free-form station.  The station is funded solely from listener support, which allows them to run commercial-free and indulge in a lot of nonsense.  I recommend The Best Show on WFMU, Tale of the 12″ (which is a podcast only), and Airborne Event as entry points to all the goodness of WFMU.
Needless to say, I love WFMU.  Both well archived and always on with something interesting, the radio station is like the best parts of all the college and public radio stations all over the country.  But you don’t have to put up with Car Talk or some freshman trying to work the board and play three hours of garage rock from the 90s that you’ve already ingested ages ago.  No, WFMU plain and simple is just cooler than you are.  They’re in Jersey so they’re close enough to NYC to get out-of-towners in the studio.  There is an endless list of culturally important artists that appear on station, from Daniel Johnston to Patton Oswalt.
Now before you think, “Not everything can be cool about the station,” what I mean when I say that the station is cooler than you is that they have been a grassroots organization that has carefully balanced freedom of speech and democracy to ensure that their content is both representative of the individual DJs and their specific aims and goals within the context of a radio show and that those who wish to be heard over that radio station are given opportunity, access, and support to develop their goals and aims.
And they also have the Free Music Archive.  The idea is that because of the way publishing and the music industry in general is these days, a radio station that is sitting on the edge of extinction and being supported by listeners propping in up from the void might not always get to play some of the music that they do.  Granted, they do play very esoteric and underground music that they don’t have to pay to play, but they are a radio station.  And you’re going to have to pay to put on some ABBA.
So the brilliant solution to the problem of not being able to pay to play any of the music — or even if the situation were worse and WFMU could only pay for the electricity to keep them on the air and literally nothing more — there would still be the FMA.
The Archive is full of original content — live, recorded or found.  And it’s all free.  Royalty-free and free to download.  Their slogan “It’s not just free music, it’s good music.” is absolutely true.  In-studio performances by Yo La Tengo?  Check.  Interviews with pioneering artists like Morton Subotnick?  Check.  EPMD live at ATP?  Check.
And what’s more is that you can get yourself a little user account and make playlists.  For the big boys, you can also apply to be a curator and throw up your catalog should you actually own a record label.
And, speaking of which, we’ve made our way to a little gem on Happy Puppy: 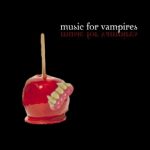 Music for Vampires
Music For Vampires features eight artists and groups, each with their own unique interpretation on the subject of vampires. The only rule given to each participant was that the music remain instrumental (with a minor exception here and there), and the results are very reminiscent of scores and soundtracks.
Fittingly, starting out with a clock tower striking midnight and some spooky chords, the album holds very tight the instruction to make the results reminiscent of scores and soundtracks.  Mostly Jon Carpenter soundtracks, but I’m so down with that I’m… in… the… BASEMENT!
I hesitate to put too much thought into this review because, after all, the music is free to you.  Just go download it already.  It’s a soundtrack to an imaginary vampire movie.  What more do you need?  That’s an amazing thing to think about, let alone organize eight different tracks from eight different musicians.  And to help you along with the plot of your imaginary film, there is a nice story arc in the music and programming of the album.  Those bells starting out the album come from Nevermore Eleanor.  I would have preferred that no names or track titles be used, because they are all as hookey as that.  But the content is there.
There are stops at moonlit windowsills for quiet contemplation of an everlasting life in darkness.  Motorcycle punks doing doughnuts in mall parking lots biting pretzel stand hotties.  The hot breath of a vamp jutting into the stone hallway of a castle’s ruins as victims scramble to escape.  Fighting amongst the ranks of vamps, before a hasty retreat from sunrise and the survivors stuporing around in the morning light.  A hot dusty trail back into town.  Regrouping, explaining, and night falling again as the album ends with “Underground” by M. Patuluci, which would fit nicely on a Halloween sound effects CD.  But one with way more class than I’ve reviewed here.  Think of a CD with a cranberry velvet slip case.
Goodnight out there, whatever you are.