KLASK (Oy Marektoy)
I have to say, I’m not a major fan of games that require me to overcome my deficit of physical prowess in order to win. Often, my own hand-eye coordination takes on an adversarial quality when I attempt to harness it as a tool toward victory. If I were a D&D character, my dex modifier would be like -2. However, I am able to see past my deficiencies when it comes to the game Klask.

Klask is basically like air hockey or foosball in that it is played on a table and expects players to shoot a ball into their opponent’s goal. It is different from those games, though, in that players use high-powered magnets to whack a marble back and forth across the court. Now you’re probably asking yourself, “Magnets? How the fuck does that work?” Each player gets two magnets: one shaped like an oversized Sorry! pawn, and a second, cylindrical rod. Players control the Sorry! pawn, which sits on the table, by moving the rod under it. It basically looks like a haunted game controlled by ghosts or players’ telepathy, as the pawns appear to move hands-free. 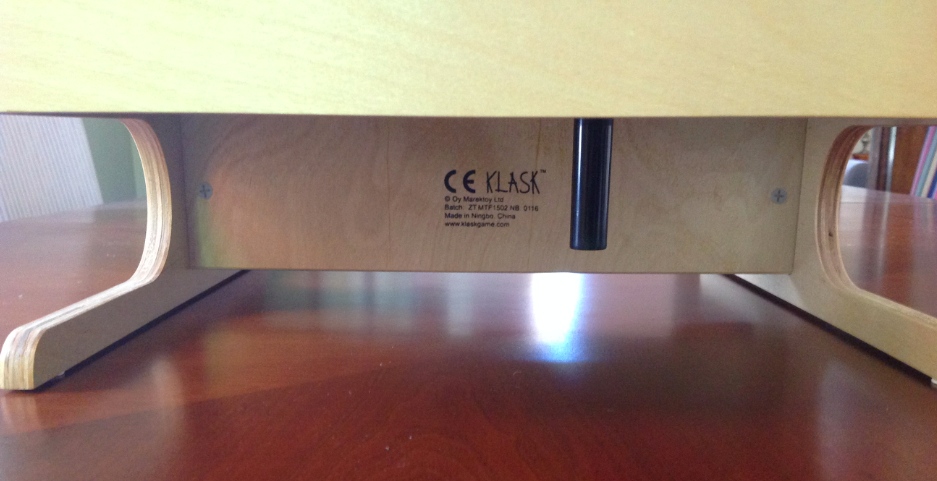 There are four ways in which players score points in Klask. Obviously, one of those ways is by hitting the ball into your opponent’s goal. However, this is a game played with magnets, and therefore requires some magnet-centric ways to screw yourself. Therefore, if you erroneously navigate your pawn into your own goal (a folly known as a “Klask”) your opponent scores a point. There are also three small white magnets that start the game in the middle of the table. During the course of normal play, these magnets will get banged about and will end up all over the place. Where you do not want them is stuck to your pawn. If you get two white magnets stuck to you, your opponent scores a point. Finally, if you lose control of your pawn to the point where you are unable to retrieve it using your magnet (like if it flies over to the other side of the table), your opponent scores a point. First player to 6 points wins.

The table is quality, too. My wife (who is the reigning Klask champion in my house) posited that if the designer had stained the wood a darker color and opted for Helvetica or Times New Roman instead of the whimsical scrawled-on-in-white-Sharpie font, they could easily market an expensive version to affluent boardgame hipsters.

Klask is a shockingly simple kind of game. I admit, my first glance at the box had me thinking, “this is stupid.” But once I got it out, it was surprisingly fun and addictive. So much fun, that I completely disregard my ineptitude when it comes to these types of games. I suck at Klask and I don’t care. This is a five-minute game that you can play all night. I can see Klask tournaments happening at parties and game nights everywhere. Highly recommended. (Oy Marektoy) by Josher Lumpkin