By Kristofer Poland
The historic Origins Game Fair was held this past weekend (if you consider weekends to begin on Wednesday) at the Greater Columbus Convention Center in Columbus, Ohio. Hercules himself, Kevin Sorbo was there signing autographs, presenting awards, and debuting his new movie Julia X. He was joined by unpronounceable Welsh actor Ioan Gruffudd (Mr. Fantastic) and more. Ghettoblaster was also there to bring you the lowdown on some really cool games both newer and older. Rather than giving you an overall convention review, I thought readers might get more out of learning about some of the games we saw as highlights of the convention.

Our first great surprise was followed immediately by our first big disappointment. We played a quick game of Steve Jackson Games’ Castellan. It’s a simple game of building castles and claiming space within them. It comes in blue/red and yellow/green varieties, and both can be combined for a four player experience. As much as we enjoyed it, it was completely out of stock by Friday. Lame.

A blimp race doesn’t inherently seem that cool to me. However, the good folks at Split Second Games just may have changed my mind with their first game Quicksilver. How? It features intuitive movement mechanics, a near infinitely modifiable game board, wonderfully thematic card art, and versatile combat. Keep an eye on these guys. If this game is a sign of the quality of things to come, gamers are in for a treat. 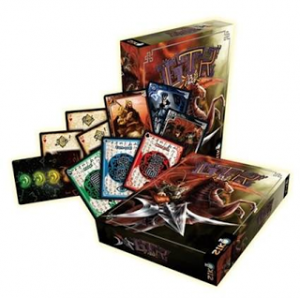 Legend of the Three Kingdoms

ZiKo games brought Legends of the Three Kingdoms stateside for the first time to my knowledge. As they explained it, it’s a game that plays a lot like Bang! featuring the stars of Dynasty Warriors. I’ve always enjoyed Bang!’s mechanics, and China’s rich history/mythology is a natural source of characters and conflicts for gameplay.

Everyone in our gaming group is excited to play Space Cadets. We’ve had our eye out for Stronghold Games’ cooperative spaceship crew simulator for over a year now, and Dave fortunately grabbed the last copy at the convention. Each player takes one role as captain, helmsman, engineer, weapons officer, shield officer, or sensor officer. Everyone has to work together to keep the ship operational by completing unique challenges specific to each role. Looks like fun on a bun!

Observant readers of our magazine may have already seen our review of Cool Mini or Not’s Guilds of Cadwallon. It charges players with taking control of different regions by placing their minions around them. While the design on the miniatures and the cards are drastically different, they’re all very nicely designed. Card illustrations are particularly beautiful. While the deluxe edition was a bit pricey, the standard set is cheap enough. This one’s a must have for anyone who loves screwing over their friends in order to claim a last second victory. 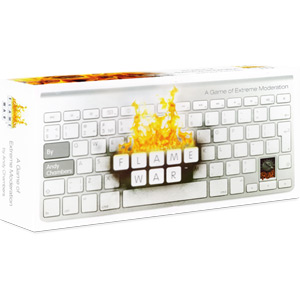 Flame War by Fun to 11 is a silly game. And that’s not a bad thing. It’s a game about forum moderation. While being a forum administrator doesn’t initially sound like a very fun concept, Flame War’s mechanics are enjoyable and simple. It makes for a great, quick game that’s full of internet themed humor. All players need to do is begin and close out three threads, making sure that conversations within them go both ways. Other players can post negative topics onto opponents’ threads to keep them open. It’s an excellent game to play when you are lacking in time or just want some quick competition between longer gaming sessions. Just watch out for the powerful ban hammer.
APE Games’ Kill the Overlord is another card game we looked into. It doesn’t take too long to play and can support up to eight players. It has the feel of a party game and was described by its makers as having a “hot-potato” feeling. All players send out Executioners to assassinate the Overlord. Unfortunately, Executioners in this game are idiots that can be easily manipulated. It has absolutely charming artwork and, despite its murderous theme, may be a good way to include your snotty, obnoxious children into your gaming hobby.
World War I dogfights have fascinated me ever since playing Red Baron on my PC as a 12-year-old kid. So it should come as no surprise that I’ve had my eye on Wings of Glory (particularly the WWI line) for years now. I was surprised to learn that Ares had acquired the rights to the game from Nexus and Fantasy Flight over a year ago, and I love what they’ve done with the Duel Pack. There are two varieties available, but I had to go with the one that included von Richthofen’s legendary Fokker Dr.I. He was the Red Baron himself, after all! It serves as a starter, providing two nicely detailed models, bases, cards, and simple rules to get players dogfighting on the quick.
Having lost an aunt to cancer and with my father currently battling the disease, I was immediately interested in John Gillick’s Castles & Chemo (Sorry to get so serious all of the sudden. We’ll return to our regularly scheduled lightheartedness soon). Gillick is publishing his own adventures and supplements and running fundraising gaming events  all to raise money for cancer research via the American Cancer Society. He claims that D&D sessions were incredibly helpful in helping him deal with his own battle against cancer and sincerely wants to help others develop that sort of support. In his own words Gillick’s organization aids in, “Granting a +4 bonus to Saves vs. Cancer.”
Founding Fathers is a game about the Constitutional Convention. Christian Leonhard and Jason Matthews at Jolly Roger Games went to great lengths to ensure the historical accuracy of this title. Everything from the design of the hall to the ideologies and quirks of individual delegates is represented here in loving detail. Articles are presented both as they appear in the Constitution and as opposing factions would have wanted them. In the end each player wants to have the most influence on the final outcome of the document. This looks to be a great title for the history buffs amongst us who might like a bit of a break from historical wargaming.

The New Science just might be the game that stole the show for most of us. Columbus’ own Conquistador Games gives us a new lens through which we can view the giants of scientific history. It plays as a resource management (or Euro-style) game with players taking on the role of famous 17th century scientists as they research, experiment, and publish their findings in a race for prestige. If you’ve ever wondered how Galileo’s unpopularity with the church affected his studies, then this is the game for you. A special point should be made of just how attractive this entire package is. A great game can be aesthetically ruined by poor graphic design. Conquistador went out of their way to make this one as enjoyable to look at as it is to play.
There you have it. We played quite a few games, and you read about them. I played in one Magic: The Gathering mini master tournament. It was single elimination, and my two crap packs and horrible land draws ended in immediate defeat. That was enough competition for me.
Although a little underwhelming this year, Origins still offered up a lot of fun. The patient gamer had opportunities to playtest dozens of new games. There were plenty of competitive tournaments for those who like to game for cash and glory. Plus, attendees could take pride in the fact that their gathering was not the most socially unacceptable gathering to take place in Columbus at the time. That dubious distinction goes to a Brony-filled Trot Con being held at Columbus’ other convention center. I secretly hoped for an all out nerd war between guys dressed as superheroes and other guys dressed as ponies. Kind of like the episode of Home Movies with the battle between the Renaissance Fair and Science Fiction Convention (https://www.youtube.com/watch?v=IkBb1k6_GkY). It didn’t happen. I guess there’s always next year.
Come on back to Gamers’ Paradise here on ghettoblastermagazine.com for upcoming reviews of the games described here and more!