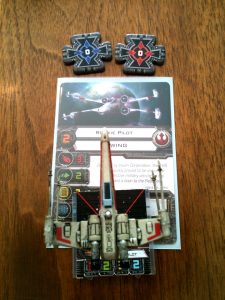 STAR WARS X-WING MINIATURES GAME
And just like that I have a new favorite miniatures game. It’s as if the good people at Fantasy Flight knew exactly what nerdy things I’m super into, and made this game just for me. Simply put, X-Wing is gaming gold. It combines two things I love. First, there’s the dogfighting from the original Star Wars trilogy. It’s so authentic I can almost hear the doppler effect of twin ion engines roaring by as I play. Second, it features compelling tabletop combat that is fast, fun and quite intuitive. The models are all detailed, beautiful, and crafted to scale. Their only downfall is that the feel a bit fragile, but any breaks can be easily mended with a little superglue or Green Stuff.
Players pick either Imperial or Rebel ships, choose their pilots and upgrades, and take to the cold vacuum of space. Each turn includes four simple phases: planning, activation, combat and the end phase. During the planning phase, each player secretly chooses a maneuver for her ship(s) to make during that round. Next, players take turns moving their ships using easily identifiable templates during the activation phase. Each ship’s activation phase ends with that ship’s pilot taking one of a number of actions. These actions can boost a ship’s defensive or offensive abilities for one round or provide some other sort of benefit. Next comes combat. Pilots shoot at each other by rolling dice to attack and defend. Plenty of modifiers spice up the action, such as locking on to enemy ships or focusing on evasive maneuvers. Finally, the end phase cleans up and sets the stage for the next round of exciting space combat. 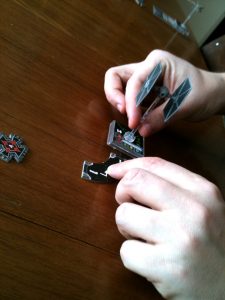 Everything, from the maneuvers different ships can pull off to the restorative power of R2 units, just feels right. All your favorite Star Wars pilots and Astromech droids are represented, and Luke Skywalker is sensibly more formidable than your average rookie pilot. Pilot skill is incredibly important, as lower skilled pilots move first but attack last. This leads to some incredibly tense moments of avoiding collisions and keeping that pesky TIE with one hull point left in one’s sights. Fights to the death and battles for victory points are the norm. Plus, the core set comes with three scenarios complete with tokens, obstacles and mission objectives. There are bound to be more missions released in the future, and players can put as much or as little effort as they wish into developing their own campaigns.
The core game is great on its own, but the action gets even more intense when additional ships like the Y-Wing and TIE Advanced are added to the mix. Let’s take a moment to go through each, one ship expansion to see what they have to offer.
X-Wing: The heart of the Rebels’ fleet is one helluva ship. It’s fast, powerful, and fairly maneuverable. Plus, the expansion includes fan favorite ace pilot Wedge Antilles! He may not wield the Force, but he has more training and a higher pilot skill than Luke Skywalker himself. 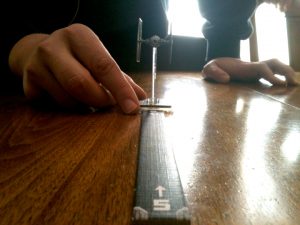 TIE Fighter: Their ability to barrel roll makes TIE Fighters unpredictable and surprisingly formidable in battle. The core unit of the Imperial fleet is less about raw power and more about swarm tactics. The more TIEs, the better. This expansion comes with some great new pilots and additional abilities.
Y-Wing: While nearly useless on its own, the Y-Wing makes for a tank of a squad member. Its ion cannon turret fires in a 360 degree arc and can short out the piloting system of any enemy ship. With an X-Wing or two as escorts, this ship can ruin any Imperial pilot’s day.
TIE Advanced: Darth Vader! Need I say more? Okay. I will. As of now, the Advanced is the only TIE with shields and lock-on capabilities. One Advanced is trouble. A whole squadron of them spells certain doom. 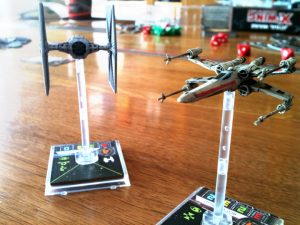 If you’re a wargaming veteran with a seasoned 3,000 point Wood Elf army, X-Wing can offer you a scaled-down and charming alternative to a universe that knows only war. If tabletop miniature battles intrigue you but committing to a game the size (and cost) of Warhammer is too intimidating, then X-Wing may be the perfect alternative. The inexpensive core set alone offers enough action and replayablity to be worthwhile. Additionally, massive fleets of starfighters can be built if you feel the need to catch ‘em all. Eight single-ship expansions are already available, and I cannot wait to see what comes next. I have high hopes for an inevitable B-Wing and TIE Bomber expansions and possibly even TIE Defenders. That’s part of the true genius of this game. Your thrilling space battles can be as intimate or as massive as you wish (and as your budget allows).
Playing with these highly detailed X-Wing minis takes me back to my teenage years when I couldn’t get enough of LucasArts’ X-Wing and TIE Fighter on my PC (Not X-Wing vs. TIE Fighter though. I thought it sucked while trying to run 8-player multiplayer matches via my dial-up connection. It was the mid-90s. The internet didn’t operate all that smoothly back then). These starships are so brilliantly designed aesthetically, aurally and tactically that my childhood obsession with them lasted throughout my teens and into adulthood. Without the Star Wars license, this would still be a terrific game. Adding to it some of the most iconic spaceship designs, memorable characters and storied histories in the vast world of science-fiction makes the X-Wing Miniatures Game absolutely exceptional. Every fan of tabletop wargaming, space dogfighting and captivating play should pick this one up without hesitation.(Fantasy Flight Games) by Kris Poland
(Editor’s Note: This review covers only the Star Wars X-Wing Miniatures Game core set and the X-Wing, Y-Wing, TIE Fighter and TIE Advanced expansions. Come back soon for reviews of the A-Wing, Millennium Falcon, TIE Interceptor and Slave-1 expansions.)