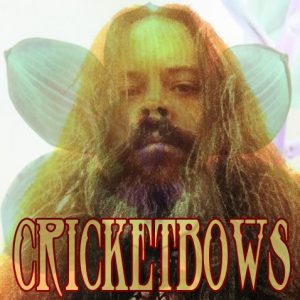 Daytonian Chad Wells, who was at one time the frontman on Misfits-inspired punk band the Jackalopes, released Home under the moniker Cricketbows in 2010 completely defying expectations for his output.  The homegrown psych-rock owes significant debts to Roky Erickson and Syd Barrett, and delivers Krautrock-esque epics that are a fry cry from horror movie inspired, four chord bangers.  For his forthcoming full-length, Lid, Wells assembled an intimate cast of collaborators, including Andy Gabbard from Buffalo Killers and Roger Joseph Manning Jr. of Jellyfish, to create a collection of songs sure to flip the script again.
Ghettoblaster asked Wells what his favorite albums of 2012 were.  Here are the albums he kept in rotation this year.
1. Chris Robinson Brotherhood – Big Moon Ritual
I’ve always been a fan of The Black Crowes but after a massive psychedelic awakening at The Ryman in Nashville on their last tour my wife and I spent a year listening to nothing but the Crowes and a handful of their offshoot bands. This one is Chris flexing his Grateful Dead muscle in his very own special way. The track “Rosalee” alone is worth the cost of this fantastic slab of wax.
2. Buffalo Killers – Dig, Sow, Love, Grow
The brothers Gabbard do it again. If there’s anyone that carries the torch that was lit by The Beatles and their contemporaries to this very day without any silly posing or bullshit it’s these bearded Ohioans. The Dayton/Cincy corridor is damned lucky to have these fellows living in it’s pollen filled valleys.
3. Motel Beds – Dumb Gold
More Ohio love. These guys make it look and sound so easy. This is in regular rotation in my tattoo station and gets a load of compliments. Somewhere between Buddy Holly, The Beatles and The Breeders with enough snarky Ohio charm to make the most jaded listener smile.
4. Black Mountain – Year Zero Soundtrack
Black Mountain as the acid drenched soundtrack for a post apocalyptic surf movie? Yes please. All fucking day.
5. Led Zeppelin – Celebration Day
We all know the stories about the Zeps selling their souls to Beelzebub for the magical power to turn blues based stompers into alchemical musical gold. It’s all true. Their combined mojo cannot be ignored. Old guys still got it.
6. Jellyfish – Bellybutton (reissue)
Oft ignored because of the Partridge Family cum Brady Bunch schtickiness – this is one of the finest albums of all time. As players and writers the Jellyfishes sit easily in the realm of Sirs Elton John and Paul McCartney. This one’s been a nonstop part of my audio pleasure center since the week it came out in 1990 and a re-release on 180 gram vinyl was long overdue. Not to mention the fact that keyboardist Roger Joseph Manning Jr. was kind enough to play on the last Cricketbows record.

7. Sabbath Assembly – Restored to One
Jex Thoth brings the Process Church of the Final Judgement’s 1960’s religious cult songbook to life… and death!
8. Redd Kross – Researching the Blues
Whether they’re playing punk rock, 70’s bellbottom arena rock or bubblegum pop the McDonald brothers give so much heart and soul that you can never count them out. These guys have been putting fantastic records, tapes and CD’s in my players since I was a little kid (and so were they).
9. KISS – The Casablanca Singles 29 7″ Vinyl Collection
I have portraits of Ace Frehley and Gene Simmons tattooed on the backs of my hands so, of course KISS are going to make it into my top 10 list for 2012. Luckily they released this AMAZING box set of their early singles so I didn’t even have to consider putting “Monster” on here. These singles take me straight back to the bosom of my youth. I can almost feel the heat from my Uncle Keith’s black light and the smell of my Mom’s reefer burning in the next room.
10. The Magnetic Fields – Love at the Bottom of the Sea
Stephin Merritt is one of those songwriters that can somehow capture the deepest melancholy and make you giggle at the same time. Wordplay that is all at once personal diary, gay bar poetry and cultural skewer. Like Cole Porter, Allen Ginsberg, Leonard Cohen and Donna Summer had a baby and gave it up for adoption to a family of chain smoking college radio DJ’s – and if you think that’s a bad thing, it’s not.
(For more on Cricketbows, visit here: http://www.facebook.com/cricketbows?fref=ts.)