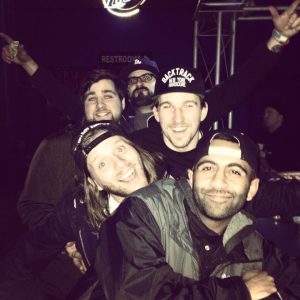 U.S. hardcore band Backtrack already have big plans for 2014; they’ve announced an Australian tour for this January/February, joined by Melbourne’s Iron Mind and Backtrack drops Lost In Life on January 14 through Bridge 9 Records.
Lucky for Backtrack guitarist Ricky Singh (and the man behind Moment of Truth zine), there is no shortage of 2013 releases for the band to play on the bus stereo between drives.  This is what he told Ghettoblaster he’s been enjoying this year, and what he’ll be anticipating in 2014.
Top 5 Hardcore LPs Of 2013
1. Take Offense – United States Of Mind
2. Down To Nothing – Life On The James
3. Terror – Live By The Code
4. King Nine – Scared To Death
5. Incendiary – Cost Of Living