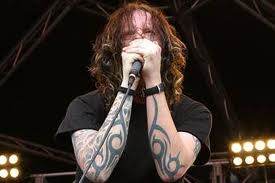 Fear Factory formed in 1989 and has released eight full-length albums. Over the course of their career they have evolved from a succession of styles, frequenting industrial metal with flacors of death, groove and thrash metal mixed in for good measure. Over the years, Fear Factory has seen changes in its members, with Burton C. Bell being the only consistent member since 1989.
Ghettoblaster recently caught up with Bell to discuss his favorite releases of 2013.  This is what he told us.
Mark Lanegan Band / Blues Funeral
I cannot stop listening to this album. There are 4 songs in a row that are my favorite, and I go to these songs directly; “Ode to Sad Disco”, “Phantasmagoria Blues”, “Quiver Syndrome”, and “Harborview Hospital”. These songs encompass his vibe perfectly for this album.
Nick Cave and The Bad Seeds / Push The Sky Away
This album is a great return to a classic sound for The Bad Seeds. His maturity and mastering of his craft shine through. A great album from start to finish. I saw this tour in NYC, and the live version of “Push The Sky Away” was intense.
Swans / The Seer
I have been a fan of this band since I was 16. The first time I saw them was a religious experience. I saw them once again this year, and the experience was still intense and spiritual. This album is heavy in a way that is beyond metal.
Gary Numan / Splinter (Songs from A Broken Mind)
The master of electro is back. This album is a masterpiece in his catalogue. He has been influencing artists for 3 decades; From NIN, Marilyn Manson and myself. Now he is taking from his descendants and making the ideas his own. It is apparent Gary is very human when he sings his words. They are fully passionate and beautifully painful. If you have the latest NIN release, you need to hear Splinter. You will learn who the master is.
Transport League / Boogie from Hell
I became a fan of this band back in the ’90s. They set a standard for Swedish rock, (in my opinion). Great hooks, great beats and SICK vocals. I became a fan of Tony Jelencovich immediately. The best voice in rock/metal to date! After a long hiatus, Transport League have returned with a smoking hot album, chocked full of their signatures that made me very happy as I was listening to it the very first time!
Plague Bringer / Life songs in a land of Death
This band is amazing. Saw them in Chicago with their 900 pound drummer ( drum machine with its own PA ). Heavy with great riffs!
Czar / No One Is Alone If No One Is Alive
I love getting an album from a new band that really rocks my world! This album is fantastic. It’s a sound that borders on industrial metal, with grind and Chicago post punk tendencies. So happy I got to meet these guys. They rule!
(Visit Fear Factory here: http://fearfactory.com/.)