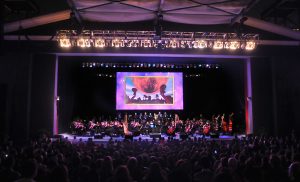 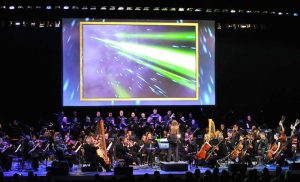 Can you talk a little about the video aspect? How the clips were chosen and how they’re integrated within the show?
The video has been pulled from the Nintendo library. We were fortunate enough to have total access to these assets in the making of the concert. In creating the show we figured out the music first and then edited the visuals to sync with the music.

People involved with the games or random celebrities?
Many of the creatives involved in the franchise have attended the shows. Often times we will get celebrities to our show. There are millions of Zelda fans including me.
I noticed that there are two stops in Mexico on this tour and wondered what brought those about? Are there any plans to do any other international dates?
We actually have more than two cities in Mexico where the show will be performed. Latin America is a huge market. We are very thankful for the fans there. The show has been performed all over the world. Sydney, Australia; London, England; Paris, Fance; Berlin, Germany.
(Catch The Legend of Zelda: Symphony of the Goddesses on…
Oct 26 at 8:00 PM in Columbus OH at the Ohio Theatre
Oct 27 at 7:30 PM in Cincinnati OH at the Cincinnati Music Hall
Nov 1 at 8:00 PM in New York City NY at The Theater at MSG
Nov 2 at 8:00 PM in Boston MA at The Wang Theatre
Nov 21 at 8:00 PM in Baltimore MD at the Meyerhoff Symphony Hall
Nov 22 at 8:00 PM in Chicago IL The at the Chicago Theatre
Nov 23 at 8:00 PM in Milwaukee WI at Riverside Theatre
Dec 1 at 8:00 PM in Monterrey MX at Arena Monterrey
Dec 3 at 7:30 PM in San Antonio TX at The Majestic Theatre
Dec 5 at 8:00 PM in Guadalajara JAL at Auditorio Telmex
Dec 9 at 8:30 PM in Mexico City MX at Auditorio Nacional
Dec 14 at 8:00 PM in San Jose CA at San Jose Civic
More information is available at http://zelda-symphony.com)

Tags: John Michael Paul, Symphony of the Goddess, The Legend of Zelda