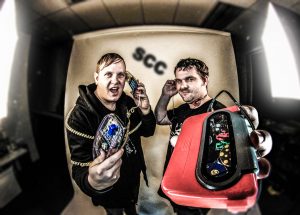 The Sound Check Chat podcast with John Bradley of Dads was released on March 1. The podcast is sponsored by Earthquaker Devices (http://earthquakerdevices.com/), Ghettoblaster Magazine, YouIndie.com and Frame Jump Music Videos.
Access the podcast here: http://goo.gl/H78pru
Michigan-based indie and emo rock outfit Dads has been hard at work since the release of its 2012 album, American Radass (This Is Important). The group’s touring has been relentless, and last summer it signed to 6131 Records for the release of its Pretty Good EP. Earning praise everywhere from Pitchfork and the AV Club who said they “strike [a] balance of proficiency and punchiness,” it’s clear that Dads have captured the attention of wider audiences.
In the midst of all this, the band began writing and released I’ll Be the Tornado, theie sophomore full-length in October 2014. Recorded by Neil Strauss of Bonnie ‘Prince’ Billy, Iron & Wine and Owen fame in Chicago, Illinois, and mastered by Carl Saff, I’ll Be the Tornado is a dynamic, introspective, and thoughtful rock record that showcases a band that is continuing to grow.
We talked to vocalist-drummer John Bradley about his upbringing, the incredible team effort that makes Dads a success and about his love for the limelight.
On March 15, 2014, the podcast launched via iTunes and Stitcher, as well as at the Sound Check Chat website (http://www.soundcheckchat.com).
Previous podcasts included interviews with Mineral, Dot Hacker, Grieves, Buffalo Killers, Circle Takes The Square, The Jazz June, Empire! Empire! (I Was A Lonely Estate) and more.