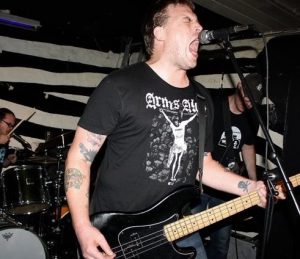 The Slow Death’s second full-length release, No Heaven, is the no-holds-barred punk album of 2013 and the second LP for the Minneapolis-based group comprised of a who’s who of punk accolites — Jesse Thorson (Pretty Boy Thorson), Annie Sparrows (The Soviettes), Logan Stang (The Turkletons), Paddy Costello (Dillinger Four), Jonny C, Dave Strait and Dan Jensen.  The band released their debut LP Born Ugly, Got Worse in 2011 on Kiss of Death Records and have spent most of the last two years honing their chops and taking their sound to audiences across the globe.
When Ghettoblaster learned that Dayton-based label Rad Girlfriend Records would be releasing the album, we knew we had to catch up with Thorson to get the scoop.  This is what he told us about being an old, grisly grandpa punk.
You recently organized the Dave Strait Fest, correct? Who is Dave Strait and what did he do to deserve his own fest?
Dave Strait is one of the guitar players in the Slow Death and probably my best buddy. I needed a date for the Fest in August and his birthday was in August and I am lazy.
What is the difference between Slow Death and Pretty Boy Thorson? Both bands do songs by the other correct?
Nah. Songs are kept separate mostly. When Slow Death first started Pretty Boy was over so we did some PBT songs to fill up the set. Then the guitar player from PBT moved back to Minneapolis and we started beating that horse again.
You’ve been doing Slow Death since 2005 or so, right? What is it about this band that continues to make it worth doing?
Nah, Slow Death since 2009. PBT started in like 2004. I spent the years between like 22 and 27 not playin’ music and just workin’ on bein’ miserable. I started singin’ songs about being miserable and I started to feel better. Now sometimes I get real close to happy. Couldn’t quit if I wanted to.  Plus i am the only constant member of the Slow Death so, I can’t break up with myself, as much as I would like to.
When a band in Dayton is popular enough to leave the city and start doing some dates in other parts of the state or country there’s usually a backlash locally and people quit going to see them. Does Slow Death still have a decent fanbase in Minneapolis?
Not really. We never had that big of a following here. We do all right and get some solid folks out to the shows, but Minneapolis is more into bullshit indie rock than strait up punk on the whole.
What is the best thing about the Minneapolis punk scene? Is it cool to have some strong allies in the same genre like Off With Their Heads around?
Best thing is that there are some great bands. Off With Their Heads are our tight buddies and have been really good to us. Ofcourse there are a lot of shit bands that are boring and keep me at home.
I have to ask you about Turnstile Comix #1. Did Mitch bring that to you guys or did someone else introduce you? How did that come about?
Avi from Silver Sproket asked us about it and of course I was stoked to do it.  It was a lot of fun and I had never actually been a cartoon before.
When did you meet Josh Goldman? Not only is he releasing the new record, but he is also the sometimes Slow Death bass player, right?
I am not sure exactly when I met Josh. I drink a lot. But I knew him from around and he was gonna do a seven inch for us and one night I was drunk and needed a bass player to come to Japan so I asked him. He was able to do it, and we got along great. He is a solid dude and fun to party with so he comes out and plays sometimes. He is touring with us in November. It is gonna be a nonstop party…’til it stops of course.
Did you have any outside collaborators or guest musicians on this record? Who would you love to work with in the future if you had the opportunity?
We always have a lot of booze when we record and people drop by and the rule is if you hang out and drink our whisky you gotta be on the record so there’s always a bunch of people on the record. Some of ‘em…I have no idea who they are.
“On Your Own” is pretty anthemic. Are the kids digging that one for singalongs?
We haven’t really started playing the new tunes yet. But thanks. Yeah, i like that one.
Slow Death doesn’t seem to have a label allegiance that follows the band – you’ve done records with Red Scare, Kiss of Death, and more. Do your friends ever fight about who’s releasing what?
Nah. I write so much shit there is almost too much to put out.
Have you ever had a bad experience with a person or label that was lesser known to you?
Yeah but we took care of them.
The idea of a Slow Death is interesting, particularly because it contradicts that old punk adage of living fast and dying young. Is being an old, grisly, grandpa punk cooler now than dying at 27?
Being older is awesome. Kinda thought I was gonna die for a while there, but I have pumped the brakes and yeah it’s pretty good. Everybody is down on being old, but i prefer it. I also think being fat is underrated too.
What do Slow Death have planned for the rest of 2013? Are you headed to Gainesville for the Fest?
Touring.  Yeah. Fest again. Every year. Always great. Touring the U.S. the UK and Australia at least. Gotta keep movin’.
(Buy the new LP here: http://radgirlfriendrecords.bigcartel.com/)