Earlier this week, Ohio-musician Brian Baker (of Brat Curse, Smug Brothers) with a little helping hand from Christian Roerig (of Skulx, The Nightbeast) perpetrated the music related hoax of the year.  Baker created a Facebook event invite (https://www.facebook.com/events/480050558862503/481391792061713/) that said Limp Bizkit was performing on the stoner high-holy day, April 20, in 2017 at a Sunoco gas station in Dayton.  The event quickly went viral and thousands committed to show up.  The problem: many believed the fictional event would take place on April 20, 2016.
By the afternoon of April 20, 2016 the story had been picked up by regional, national and even international news sites such as NewsWheel, Gawker, The Daily Beast and Vice.  The event also caught the attention of Limp Bizkit frontman Fred Durst, who called out Baker as a “poser” on Twitter while tweeting to the Dayton Police Department who debunked the event.
According to Dayton television news outlets, many showed up for the event, chanting, “This is awesome!” and “We want Fred.” 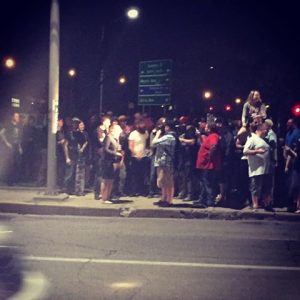 Bizkit “fans” line the streets on Wayne Ave. in Dayton for a glimpse at Durst and co.

Although Limp Bizkit didn’t show in 2016, with a little “faith” maybe the 2017 will deliver the band to a gas station in the Gem City.
For more on Baker’s own musical endeavors, visit https://bratcurse.bandcamp.com/ and https://smugbrothers.bandcamp.com/.
For more on Roerig’s bands, visit https://theskulx.bandcamp.com/ and https://www.facebook.com/thenightbeast.
More information about the “event” is available here: http://www.thedailybeast.com/articles/2016/04/20/meet-the-hero-who-duped-ohio-into-believing-limp-bizkit-is-having-a-concert-at-a-gas-station.html.