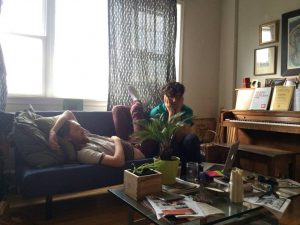 Eric Slick and Dominic Angelella have been collaborating as Lithuania for about a decade, and yet until recently they’ve only had an EP (Heavy Hands) and a 7″ (Domesticated God) to show. The two friends are infinitely busy—Slick plays drums in Dr. Dog and Angelella writes songs for DRGN KING—but they finally orchestrated the time to record their first full-length album aptly titled Hardcore Friends, released by Lame-O Records this August.
Slick and Angelella first met in the jazz program at University of the Arts in Philadelphia and quickly realized they were the oddballs amongst their classical peers. They immediately connected through mutual musical interests like Husker Du, Captain Beefheart, Boredoms, and Bjork. Dom would take Eric to basement punk shows in West Philly, while Eric would take Dom to the Avant Gentleman’s Lodge, a defunct venue that catered to the Philadelphia art scene. Eventually the two began playing music together.Recorded in five days by Joe Reinhart and Kyle Pulley at The Headroom Studios in Philadelphia, Hardcore Friends spans the last ten years of their friendship.
Ghettoblaster recently caught up with Slick to discuss the record and this is what he told us.
You met originally at a jazz program at University of Arts in Philadelphia. Is it a far stretch to go from jazz to indie rock or punk?
I don’t think it’s much of a stretch at all. Music is expression, and I think at our core we believe that there’s a vast array of emotions that you can utilize in any song or piece of music. Some of the most “punk” or “indie” records are free jazz records. Especially one called Spiritual Unity by Albert Ayler.
You guys have other, very active bands, what made the Lithuana collaboration something you had to do?
Dom and I have been writing music for 10 years together and we finally felt like we were ready to make a full length. The time was right.
When did you decide to add Andrew Futral and Ricardo Lagomasino to the band? Are they on the record?
Andrew is not in the band, but he was going to play bass at one point. Love that guy. I wanted to play guitar live and so we asked Ricardo to join our band. He is the best drummer I know. The record is just Dom and myself.
When did you begin writing for Hardcore Friends? Is there a theme or message you were trying to communicate or was it more organic than that?
We started writing the record in 2007. The theme of the record is loose, but it’s a chronological narrative of our deep friendship and the difficulties we’ve had in situations. I read the lyrics the other night and I was shocked at how on the nose some of it is. In my mind, the songs are like letters being written back and forth between me and Dom. We’re really trying to comfort each other in the music.
Half the record was written a long while ago and half more recently? Are you biased towards like the newer material better?
I think I like the whole thing, although listening back you always pick it apart and hear the flaws. “Pieces” and “Hardcore Friends” are new songs and I think they’re our most open songs. But “Deaf Gene” is also one of my favorites because Dom and I wrote it together.
On songs like “Place of no Tomorrow” I hear both Desaparecidos and Guided By Voices influences, but perhaps that’s me listening with my own lenses and inferences? Are there touch stones you will acknowledge when it comes to this project?
Touchstones: Husker Du, Minutemen, Boredoms, Make A Rising, and Flaming Lips.
You guys had some help from Frances Quinlan and Rachel Browne, right?
And they totally made the song incredible. I cry every time when they come in on the chorus of “Hardcore Friends.” I’ve got tissue paper feelings though.
How were Lithuania received during the tours with Hop Along and mewithoutYou?
Better than we could’ve ever hoped. It’s going to be hard to tour with anyone else because they’re both so kind and giving. And so are their fans.
What’s next for Lithuania?
Lots of shows, I hope. We’re looking to tour as often as humanly possible. We also started writing our next LP but it will not take 10 years, I promise.
(Visit the band here: https://www.facebook.com/lithuaniabros.)