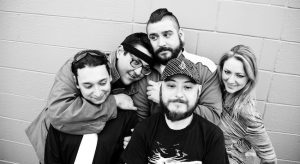 The Hawks (of the Holy Rosary)

San Antonio pop-punk outfit The Hawks (of Holy Rosary) just announced the release of their sophomore album, What Team Am I On?, out July  via Texas Is Funny Records,
The band originally started as a two-piece, made up of childhood friends Frank Weysos and Chuck Hernandez, and takes its name from the local academy they attended together. Now with six members, the band creates high-energy, exuberant garage-pop tunes delivered with a cheeky punk attitude.

Ghettoblaster recently caught up with Weysos to talk about one of his favorite records, Dr. Dog’s Easy Beat.  This is what he said about it.
What is your favorite album?
Dr. Dog’s Easy Beat. Hands down.
Do you remember when you received or purchased the album?
Chuck, our bass player, gave me the CD back in 2005.
What is your favorite song on the album?
“The World May Never Know.”
What is it about the song that resonates with you?
The tones on that song are amazing. It’s gotten old at this point that everyone says Dr. Dog sounds like The Beatles…but at that point it was like, holy shit.
Have you ever covered a song from the album?
Yeah, The Hawks played “Wake Up” at a friend’s album release party. It was cool cause we printed out the lyrics and put them in envelopes. And at one point we told the audience to open their envelopes and sing along. And they did. And it was awesome.
What is it about the album that makes it stand out against the band’s other output?
Again, it’s the tones. It’s lo-fi, but damn does it hit the spot. It just sounds timeless.
Have you ever given a copy of this record to anyone? What were the circumstances?
I have given out so many copies of that album that it’s just ridiculous.
Which of the records that you’ve performed on is your favorite?
The Hawks new record, What Team Am I On? is by far my favorite record to have been involved with. It’s my best work to date.
What is your favorite song on the album and why?
I’d say “Snakes and Hawks”. We wrote the song together and everyone sings and plays on it. I also, think it’s the best sounding track on the album.
(Connect to The Hawks (of Holy Rosary) via Facebook and Twitter.)