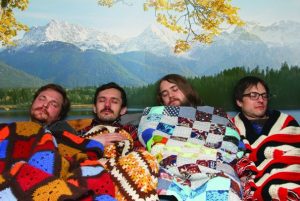 Homemade, an Ohio-based quartet assembled by Buffalo Killers  guitarist Andy Gabbard, delivers a sound that blends elements of country, rock and psychedelia that appeals to a new generation of rockers who appreciate Americana and alt-country for its rootsy, down-home approach. Listeners raised on a combination of country and rock, as Gabbard admits he was, will no doubt feel the beating heart of both genres driving the sad and introspective narratives Gabbard and his troupe deliver.
Ghettoblaster recently discussed the band’s origins, direction and approach with Gabbard.  This is what he had to say…
When did you begin Homemade and what is the format? Is this a solo project or do you have collaborators?
Homemade began with me recording demos at Ryan Wells’ (bass player) apartment when he was living in Dayton. He moved to Columbus and showed our pals David Fowler (ex-The Cinema Eye, drums) and Sven Kahns (steel and second guitar), and they all started to encourage me to play out on my own. Eventually I ended up having a residency at South Park Tavern, which Kyle Melton asked me to do, and I had a lot of time to fill up every night so I decided to form a new band to play half of my solo set. Since then it has become what it is, a four-piece, vocal driven, melodic Ohio rock group.
What catalysts inspire the songs you write for this project?
Country music has heavily inspired this project. Also catchy pop rock groups like Big Star, Teenage Fanclub, Lovin’ Spoonful, The Byrds, stuff like that. Most of my songs are sad. There may be a couple happy songs here and there. I can’t remember (laughter).
In terms of country music, what are your major touchstones there?  How did you become endeared to that genre?
Gram Parsons, Flying Burrito Brothers, The Dillards, Doug Sahm, Waylon Jennings, Mike Nesmith, George Jones, Gib Guilbeau. My parents always listened to country and bluegrass music. That stuff goes right along with rock n’ roll man!
What is one record that was released in 2012 that you wish you’d released or inspired your direction with Homemade?
I was mostly inspired by old records I was turned on to this year, by friends or good record store finds. Bobby Charles’ self-titled and Jim Ford’s Harlan County are a couple. The new Neil Young and Crazy Horse is amazing.
What is your favorite Homemade song and how did it come together? What is it about the song that gets you most stoked about it?
“Glum & Empty” is a definitive Homemade song. And it’s our first song. What it was when I played on an acoustic by myself and what it has become is very inspiring. At first I felt it was too quiet and dark to even play as a full band. But once everyone started playing, it became an up-tempo pop rock song. It’s exactly what Homemade is all about.
Did any of the material you’ve prepared for Homemade start out as an idea for Buffalo Killers?
When I’m writing a song in my head, I know exactly what I’m going to do with it. It’s easy to tell if something is going to be a Buffalo Killers song because I start to hear Joey’s drums playing and my brother’s bass part. Same thing with Homemade, I can hear Sven’s steel in my head and David’s drums. I write so many songs and have written so many songs in the past that it is so nice to have more than one outlet.
What releases do you have planned for early 2013?
We have a full-length recorded and we are working on getting that out and available to everyone. We plan on crankin’ out records and playing all over wherever we can in 2013. We’ve been playing in Sven’s man cave for most of 2012 and we’re trying to catch you all up on what we’ve been groovin’ on.
What is the title of the new record and does it indicate a theme?
The album is called Homemade T.C.B. It’s got a picture I drew of my cat, Yoko, on the front. The songs are about my life and inner thoughts. Loner rock for those on the outside looking in.
With Buffalo Killers in an album cycle and a new baby on the way, how did you avoid sidelining Homemade?
These guys are like family to me and they’re with me through everything. So even if we go a few weeks without rocking out together, we’re still on the same page, working on something else. These guys have other projects as well. Ryan and David are in Moon High and Sven is playing with Black Swans. So we all keep pretty busy. We have something really special together with Homemade and it’s lots of fun.
Has there ever been a proper Homemade tour?  Do you plan on doing some touring in support of the forthcoming record?
Not yet. We plan on getting out and spreading the word wherever and whenever we can in 2013.