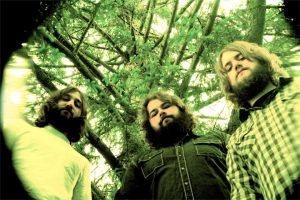 If Andy or Zach Gabbard were ever the kind of dudes to approach an interview with pretense or façade, neither of those things are apparent or present on this evening meeting.
Before closing the record store where Andy works to begin the interview, he sells a female patron three Bel Biv Devoe albums.  He smiles as he questions his brother about what groups actually comprised the “east coast family.”  They settle on BBD, Another Bad Creation and New Edition, before Zach sings a few lines from ABC’s “Playground.”
“We aren’t negative or angry people at all,” Zach explained.  “We sing about our lives, our families, and our romances with honesty.
“I want to tell a lot of bands to quit bitching; people listen to music to forget their problems, not to take on yours,” Andy added.
Their positive outlooks are apparent as they describe their upbringing in Lebanon, Ohio, and learning to play guitar from father Randy (who had the very first Buffalo Killers tattoo inked in his skin).  They also speak with fondness for their experiences in Cincinnati garage band Thee Shams.
“I’m proud of the work we did with Thee Shams and Sign The Line was a coming of age for us,” Zach recalled.  “It also signaled to us that we were a completely different band and different people than we were when we started.”
The brothers, along with Thee Shams’ Joseph Sebaali, formed Buffalo Killers and released their self-titled debut via Alive in 2006.  Shortly thereafter, they were invited to join The Black Crowes for a string of dates.
Though the Crowes are notorious for brotherly dust ups, there is no rivalry present with the Gabbards.  The frictionless relationship has allowed Buffalo Killers to remain relatively prolific.  Let It Ride was recorded in July 2008 with Black Keys’ Dan Auerbach.
“That record was a lot of fun to make.  We were living in this trailer and we’d go out to play a show and come back to find that Dan and T-Model Ford crashing out with us in our trailer,” Zach recalled.
“The only bad part was that T Model would eat all our groceries,” Andy joked.
2011’s 3 and their latest effort, Dig.Sow.Love.Grow., was recorded at Mike Montgomery’s Candyland Recording Studio in Cincinnati.
“For the latest record we didn’t do any preproduction.  We realized that we almost always get the best performance out of their first take,” Zach explained.
Both men seem pleased with the end result, and speak with high regard for Montgomery’s efforts.  “Mike has a ‘magical ear.’  He takes us in, respects us on a personal level and as musicians, and really makes it easy for us to be who we are,” Andy said.  “And Alive believes in us so we’ll continue to do what comes naturally for us, which is writing songs and making records.”
Zach is a bit concerned about one fan’s reception to the record.  “My four-year-old daughter told me, ‘I don’t think kids will like this.’  I think she’s coming around though.”