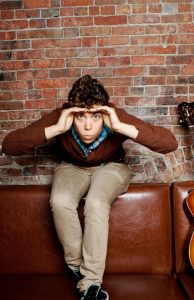 Kristen Ford, a singer-songwriter from Boston, Mass. with a high energy live show, blends rock, reggae, indie and folk for her spontaneous, soulful songs. Although Ford’s style has been described as “pure rock n’ roll screaming with childish joy” or “like talking to a child with ADHD,” one thing is certain – she’s a master of all the genres she manages to play at once.
With a recent win from the Iguana Music Fund under her belt, a 26-date national tour that commenced this month and an upcoming appearance at the National Women’s Music Festival, 2013 will be a big, big year for the songstress.
When did you first realize you were a performer and under what circumstances did you gather the courage to put together your band?
I have always been very theatrical. I used to do theater when I was younger. I started playing guitar, writing songs and performing them. When I began playing out live, I got really addicted to it. It is a wonderful feeling that I couldn’t get from anything else.
I remember the first time I ever rehearsed with a drummer. I’d been playing songs on acoustic guitar when I was 17 and had a realization, “Oh my god, there’s a beat that goes to this song!?! This is amazing and crazy!” So I’ve always loved to take a song and try to figure out what else could be added to it. Right now I have a six-piece band. When I am on tour solo or as a duo, it is always paramount in my mind that I should figure out how to provide a multi-dimensional show as one or two people.
You are a multi-instrumentalist, correct? If so, which instrument is your primary passion?
That is correct. I would say that singing and playing guitar are my primary focus. When writing a song, the chords and the music and the words come out all at the same time. I really love singing because it is something that is uniquely me. Only I’m going to have my voice. Playing guitar is really fun. I’ve been doing that for 11 years. I’ve also had the opportunity to play drums in bands and I really love playing bass, too. It is all music, so there’s no need to pick favorites.
What milestones were you able to reach for the first time with your third full-length, The Grindstone?
Well, it was the first time that I produced my own album. For my other albums, I was under the direction of a producer that I’d hired. This time, I was pretty confident in the direction of the project and the orchestration of the band. I used a Kickstarter to help fund the project, which was pretty amazing. I had worked really hard and saved up a bunch of money, but by the time I had finished paying for tracking, I had run out of money for mixing, mastering and duplication. With my fans’ help, I was able to finish the project.
I also had Roger Seibel master it. He had mastered albums by my favorite artists like Death Cab For Cutie, Modest Mouse, Tegan and Sara and Liz Phair. It was just crazy to have someone who put the finishing touches on albums that were really influential to me put finishing touches on my album.
Was there a point before working on the album where you reached an epiphany that you could trust your own direction rather than relying on a sanity check from a producer?
I felt like I had way too many songs and that I needed to get in the weeds with those before I could determine what was really workable. I just felt like it was time to experience the next big thing. In looking forward now, I’m flipping the other direction and I’m going to hire a producer again for my next full-length album. So, I don’t know if it was an epiphany because music is what I eat, sleep and breathe everyday. That is an insane cliché, but that evolution just came naturally.
Is there a lyrical theme that tied that record together?
I guess I write about love a lot, but my favorite songs are the ones that can be about whatever you want them to be about rather than explicitly explaining what they are about. There isn’t too much of an overarching theme, but I guess it is about chasing maturity.
Are there moments in your live performance that are interactive with the audience?
Absolutely, and they are the most fun for me. Covers can be pretty attractive because people recognize those. I will also have people give me a color, a noun, a verb, a season and which key and I’ll make up a song on the spot. And some of them are pretty good. I like that improvising.
Boston, your home base, has a really robust legacy of strong singer-songwriters and bands. Are there any Kristen Hersch or Aerosmith covers in your set?
Um, no, not at this point, but there’s still time. It could happen at some point.
(Check out Ford’s tour dates here: http://www.facebook.com/KristenFordBand/app_7085335997.)