Yup, it’s Friday and that weekend is right around the corner. It’s also movie night but I’m not sure what I’m going to see. I’m still way behind movie releases but is it weird that I want to go see Power Rangers? As corny as the TV shows were, I’ve been inundated with multiple episodes from back in the day, since they’re all available on Netflix. Obviously it isn’t me that wants to watch them.  Then there’s Get Out that all my friends talk about. But damn, I still need to see that second Dave Chappelle stand-up. The first one had me busting a gut. He leaves no room for anyone to bitch and moan, and attacks everyone, including himself in that stand-up. I’ll probably stay home. Or maybe I’ll go to the movies. That’s right, I can’t make up my mind. So that’s my plan, if you can in fact call it a plan. But as always, what this has to do with Ghettoblaster’s Friday Roll Out(!) is nothing at all.
I’ve been listening to a few things this week but only focusing on a couple of groups today, like Columbus, Ohio’s Tasty. The duo of Ian Graham and Jay Sparrow play their brand of garage rock, or trash pop, with a considerable amount of (what are the words I’m looking for here), um, carefree abandon. That’s what the self-titled album here (Superdreamer Records) sounds like. They let the ideas flow and let it fly and land wherever the direction takes it too. That’s probably why the album is so appealing. No fucks are given about what you may think of them or the music, they just know a good time’s going to be had. The opening “Nuf On” goes directly for the jugular with that low-end guitar and drum clatter pushing things to the limits; albeit with a seemingly bare-boned attack. I’m hard pressed to say Tasty’s sound is derivative by tossing in comparisons to others that came before them but you know what? It’s OK because the band plays at it better than most. They take the best parts of the sound they abuse and embellish it with a unique quality. “Who’s Holdin'” works a melody right into the ground so well you’ll be glad it’s as straightforward as it is. The song blends directly into “Fast Food” that has a one-two punch while “Affluenza” is a fuzzed out dream as they kill the track from beginning to end. There isn’t a stinker on this mini-album which only holds 7 tracks in all but the one track that stands out above the rest is “Witching Hour.” Here the duo plays with dynamics and stop/start techniques. The repeated lyrics of “It’s my witching hour/time to care less” works to the band’s benefit, creating a mood of darkness. It’s clear, Tasty’s self-titled release is a motherfucking winner here.

Now, when I think of L.A. I just don’t know what to actually think of anymore. We can all agree that it was once synonymous with cheesy hair bands that flooded airwaves and anything worth listening to was difficult to come by. Today though, that’s not the case so much. The Buttertones have released its second album Gravedigging (Innovative Leisure) and when you think you’re getting one thing, something else happens altogether. The 5-piece outfit is as out of place in this era as Trump was considered a presidential candidate. To simply call the group influenced only by surf music would be a misnomer. They seem to have been impacted as much by soul as much as garage as well.  The opening cut begins with a march that would probably make the Clash proud. But it’s the dominating sax and beautiful harmonies that take over atop jangling guitars and a rhythm section that just won’t quit. But it’s hard to shake that 60’s feel throughout the album like on “Sadie’s A Sadist” when that rhythm has you moving like you’re in an old Frankie Avalon flick, although this one having a leather-clad Annette Funicello.  The group doesn’t relinquish the culture clashing sounds with its darker imagery. The tone of “Two-Headed Shark” harks more towards Roky Erickson with wacked-out imagery. But it’s on “Matador” where  guitarist/singer Richard Araiza challenges listeners with his high pitched melodies midway through. And the musical interplay? Man, they leave space to breathe but then hit every note with such precision. But there’s more to the band here; just listening to “I Ran Away” I get the feeling the band sometimes immerses itself in the era it was time-warped out of drenching itself in music by Ritchie Valens, The Big Bopper and Buddy Holly. You can only get away with it if it’s done well and here The Buttertones are masterful! Lord have mercy 11 tracks of songs and I’m digging Gravedigging. 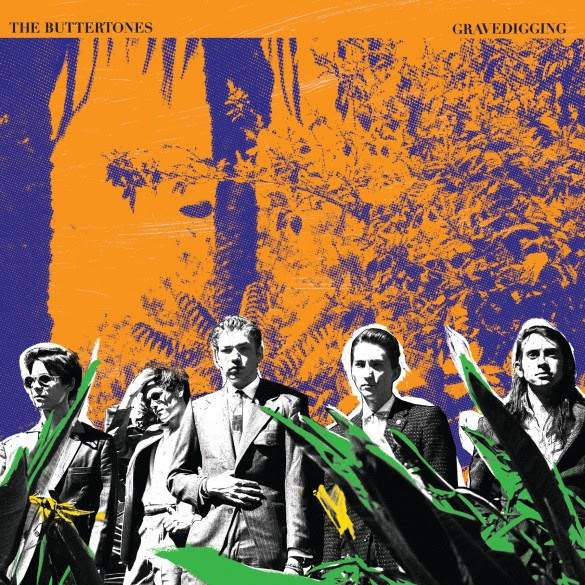