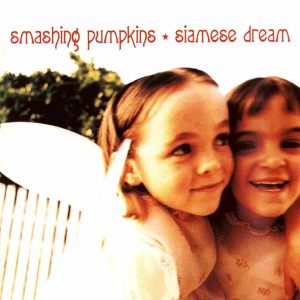 NYC-based Little Bombs released their two-song 10″ LP on October 22. The record ws produced by Jesse Gander (Japandroids, White Lung), and is very much in the vein of ‘90s/post rock – reminiscent of Smashing Pumpkins or The Replacements.
It is no surprise them that when Ghettoblaster asked LB guitarist Kieren Smith about his favorite album he cited Siamese Dream.  This is what he said about its influence on him.
What is your favorite album?

Siamese Dream.
Do you remember when you received or purchased the album?
A friend burned a copy for me back in ‘97/’98.  When I was a kid me and a group of my friends had this deal where whenever one of us bought a new record, we would either burn it or rip it to tape and share it with each other.  It was a really cool way to find new music and we were just kids so we were open to anything.
What is your favorite song on the album?

“Rocket” is by far my favorite song.  As a guitarist, I pull a lot of influence from Corgan.  It’s funny because both he and I are heavily influenced by David Gilmour, so it is weird learning through this lineage between generations with the two of them.  The guitar parts and melodies on this track have had a huge impact on the way I play and write.
What is it about the song that resonates with you?

The flow and pulse of the song is very circular and i love the sense of spinning you can feel when you really focus in on the music.  It’s absolutely wonderful.
Have you ever covered a song from the album?
I have not.  I have somewhat of a fear that I couldn’t pull it off and don’t want to try to re-create something so perfect in my mind.
What is it about the album that makes it stand out against the band’s other output?

I feel like this was really the most honest album the band ever made.  They were just coming off of Gish, which was raw and undeveloped, yet they weren’t quite into their deeply artistic phase with Mellon Collie.  Between these two points I think they found themselves in an honest and aggressive, yet still somewhat seasoned, headspace when writing the album and they really hit it out of the park.
Have you ever given a copy of this record to anyone?  What were the circumstances?

I gave this to my little brother recently.  I was going through a bunch of old albums and he had mentioned he liked a few of their songs.  I handed it to him and told him to listen to the whole thing front to back or don’t bother listening at all.  In the digital age we lose the experience of listening to an album and hearing the story front to back.  It is a listening approach I would really like to see younger people give a chance.
Which of the records that you’ve performed on is your favorite?

I would have to say our current 10″ that is out now.  A huge part of being an artist is growth and it is encouraging to listen back to your latest work and hear that.  It is extremely rewarding.
What is your favorite song on the album and why?

“Strange” is the strongest song I have written in ages.  I go through cycles as a writer, just like most people, and a lot of the time I find myself writing from weird places that eventually don’t hold as much water as others do.  When I wrote “Strange” I was in a very honest place in my life and it felt good to call it like it is.
(Visit Little Bombs here: www.littlebombs.bandcamp.com.)