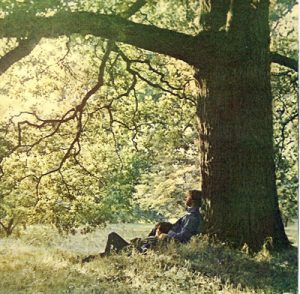 Toronto’s Animal Parts recently released their second EP in as many months with Six Arms To Hold You. Drawing heavily from influences ranging from Wilco to Neil Young and Leonard Cohen, Animal Parts’ melancholic guitars and heartsick vocals tenderly chronicle the loneliness and nostalgia that come along with making a home on the open road informed by the band’s relentless touring.
In a little over a year, Animal Parts’ have churned out three impressive albums. Although a considerable output, the substance and variety in each collection of songs is a testament to singer/leader Joshua Cockerill’s raw, heartfelt and uncompromising songwriting.
Ghettoblaster recently caught up with Cockerill to discuss another piece of uncompromising songwriting, John Lennon’s Plastic Ono Band.  This is what he said about it.
What is your favorite album?
John Lennon’s Plastic Ono Band.
Do you remember when you received or purchased the album?
It was my brother’s, he had it on tape. I would sneak into his room and steal the tape to listen to, leaving the case so he wouldn’t notice
What is your favorite song on the album?
Depends on the day. On every listen it speaks to me from a new direction. Today, it’s “I Found Out”
What is it about the song that resonates with you?
Firstly, the brash nakedness of the sound and instrumentation. John’s guitar playing is amazing and, with the band being a trio, it’s amazing to hear him driving the whole thing. The lyrics are naked too. Generally speaking, the lyrics are always what I care for the most. John’s naked in his lyrics too. There’s nothing he won’t talk about. I find this true of the record as a whole. He gets to talking about his dad even.
Have you ever covered a song from the album?
Maybe in private to figure out something technical a figure picking pattern or a riff.
Actually I’m lying. I’ve played the songs to myself sometimes to make me feel better, but it wouldn’t feel right for me to play it in public.
What is it about the album that makes it stand out against the band’s other output?
The sound, the fact that it is so raw, and it was the first thing to come out of John after the disbanding of the Beatles.

Have you ever given a copy of this record to anyone?  What were the circumstances?
I’ll play it for anyone that listens. I have a habit of buying my favorite books in order to give them to friends, but I haven’t done the same with records. Maybe I’ll start.
Which of the records that you’ve performed on is your favorite?
As far as other people’s records I’ve played on, everyone one is a treat to do and be a part of. Can’t pick favorites there.
As for my records, I’m currently invested in my two new releases Other Rooms and Six Arms To Hold You. Other Rooms is very naked. I guess you could call it my Plastic Ono of sorts. I’m glad I made it.
What is your favorite song on the album and why?
I’m enjoying playing “Grey Owl Call” from Six Arms To Hold You at the moment. The song was written for Jason Molina the week I learnt he was sick. The song’s meaning has changed a lot to me as I’ve played it from that time to now, after his passing. I haven’t changed a word of it, out of respect, and it is often hard to sing.
(Listen to Animal Parts’ “Where The Heart Is” via SPIN or Soundcloud and watch Southern Souls Session of “Home To You” / “Lake Travis” from Other Rooms.  Visit them here: www.animalpartsmusic.com.)