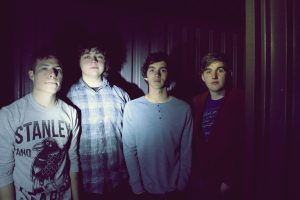 Hailing from Central Texas, Calamity Jane are a mix of influences from Blink-182 to Set Your Goals and if we’re being honest, they sound like a pretty fantastic mix of the two. The foursome are gearing up to release their debut EP, We’ll Explain When We Get There.  Their track, “Sweet,” recently premiered on Infectious Magazine HERE.
Ghettoblaster recently caught up with the members of the band, guitarist Gaven McNaney, drummer Davis Dillon III, bassist/vocalist Cameron Quintero, and guitarist/vocalist Cameron Brickell to discuss their favorite albums.  This is what they told us about their faves from Green Day, Blink-182, Least Of These, and From Indian Lakes.
What is your favorite album?
Gaven: Dookie by Green Day.
Davis: Blink 182’s Self-Titled.
Kevin: Change Will Come by Least Of These.
Cameron: The Man With Wooden Legs by From Indian Lakes.
Do you remember when you received or purchased the album?
Gaven:  My friend Hannah gave it to me for my 13th birthday.
Davis: I got it digitally a long time ago, but I got the hard copy pretty recently.
Kevin: Yeah, when it came out last summer I borrowed a copy from a friend of mine.
Cameron: Well, I first heard the album off Spotify in 2011/2012. When I finally saw them in November last year, I actually purchased the album.
What is your favorite song on the album?
Gaven: “Burnout,” probably.
Davis: I’d have to say “Asthenia”.
Kevin: “When Seeing Still Isn’t Believing.”
Cameron: “We Are Invincible.”
What is it about the song that resonates with you?
Gaven:  It’s just an awesome song and it’s fun to jam out to.
Davis: I like the nostalgic feeling it gives me.
Kevin:  It’s a song I can relate to. It talks about how even though we witness something so unbelievable that actually happened, it can be hard to take in or even comprehend with the mind. Sometimes it takes heart or faith to believe in something instead of mere facts and signs.
Cameron: I first heard it during a time in my life when I was pretty self-depreciating, dealing with certain aspects of life and all whatnot. When I first heard the song I was like, “Yeah, I feel you man.”
Have you ever covered a song from the album?
Gaven: By myself, yeah. “When I Come Around” and a few others.
Davis: “Asthenia” and “Always.”
Kevin: No. I would not do it justice.
Cameron: I covered “Away!” once for a random acoustic set at a coffee shop. It was actually the first time I performed anything with a guitar/my voice.
What is it about the album that makes it stand out against the band’s other output?
Gaven: It seems more genuine than their other stuff and it’s so perfect every song is great.
Davis: The versatility of the album is definitely what stands out from their other albums
Kevin: It’s a very bold album. Here’s the thing. The band believes in a God who gave his Son as the ultimate sacrifice for our ransom. So that we may look back on His sacrifice (Jesus, the Son) and only but give our entire lives to Him as he did to us. That’s it and in the faith life we mess up a lot as Christians. The album is just a perfect picture of what it is like to be a believer and worship a king and it just takes you on am emotional roller coaster through life from their in many ways we can relate.
Cameron: It was their debut. Don’t get me wrong, Able Bodies (sophomore record) is utterly fantastic, but the impressiveness of having a debut independent album be that solid really gives it a lot of ground.
Have you ever given a copy of this record to anyone?
Gaven: No.
Davis: Nope.
Kevin: Yeah, a friend wanted it but didn’t have money. (However it IS up for free on Comeandlive.com so if you want yourself a copy, go get one!)
Cameron: Since I’ve never owned a physical copy, no. I have shown the record to plenty though. (Probably rather obnoxiously, I might add. I’m kinda pushy with music.)
Which of the records that you’ve performed on is your favorite?
Gaven: We’ll Explain When We Get There.
Davis: We’ll Explain When We Get There.
Kevin: We’ll Explain When We Get There.
Cameron: The yet-to-be-released We’ll Explain When We Get There EP is the first record I’ve been on, so I guess it’d have to be that!
What is your favorite song on the album and why?
Gaven: “Bandit”. Because I just really love that song, plus the “riff” from it is my baby.
Davis: “Pidcoke.” It has the greatest deliverance out of all of our songs, in my opinion.
Kevin: My favorite song that we have right now….I wanna saaaay it will have to be “Quincidentally” because it’s a fun song but also reminiscent of good memories that I feel like a lot of people can enjoy. Also, it’s the only song I didn’t write which is pretty cool.
Cameron: Definitely “Centipede.” I’m a sucker for short punk songs, so having our own is nice. Performing it is also a blast because that song just asks for energy.
(Visit Calamity Jane here: https://www.facebook.com/Calamitypunk.)