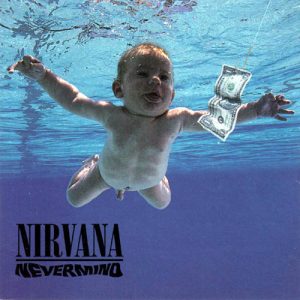 Alex Fitts, also known as The KickDrums has been involved with making a bunch of tunes that you probably are familiar with as the Brooklyn-based singer/songwriter/producer has lent his talents in some form or another to artists like Lana Del Ray, Machine Gun Kelly, Rockie Fresh, Scarface, Slaughterhouse, Casey Veggies. The genre crossing artist is known for his ambidextrious style and Thinking Out Loud, which was released yesterday via Hopeless Records, further pushes the limit of The Kick Drums sound with all the elements of ambient, electro, rock, and hip-hop genres.
Ghettoblaster recently touched base with Fitts about another widely-celebrated, genre-changing rock album.  This is what he said about Nirvana’s Nevermind.
What is your favorite album?
That’s a REALLY hard question because I love so many, but in terms of over-all influence on me and just loving an album growing up I’d say Nirvana Nevermind. May seem a bit cliche because everyone really likes that album, but I loved Nirvana as a kid and that album basically taught me how to play guitar and drums because I’d play along with it or jam the songs with my friends all the time.
Do you remember when you received or purchased the album?
I was pretty young when it came out so I didn’t actually discover the album until three or four years after it was released.
What is your favorite song on the album?
“On A Plain.”
What is it about the song that resonates with you?
The lyrics “It is now time to make it unclear / To write off lines that don’t make sense” always stuck with me as a songwriter. That been my inside joke for as long as i can remember.  To me he was saying, “I’m gonna craft some words that can mean whatever you’d like them to mean.”
Have you ever covered a song from the album?
Naw. I probably never would. It’s too perfect the way it is. May be cool to do a song live though.
What is it about the album that makes it stand out against the band’s other output?
It just had such great songs. Kurt Cobain really proved himself as amazing writer. I think he felt he made a point with that album and wanted to get away from it on In Utero.
Have you ever given a copy of this record to anyone?  What were the circumstances?
No, I don’t think so.
Which of the records that you’ve performed on is your favorite?
I really like playing “Can’t Hide Love”. I dunno it’s just such a weird song which makes it fun to play around with on stage.
What is your favorite song on the album and why?
I’d have to go with “Fool Killer”. I like that beat a lot. It bangs out, but is melodic at the same time. It also has a few different vibes happening all at once which is pretty cool I think.
(Check out the video of a song from the album here: http://youtu.be/2Fwj1PdMSgo.

Their second single off the album, “Atonement” is currently climbing up the HypeM charts — check it out on The Music Ninja here: http://www.themusicninja.com/the-kickdrums-atonement/.)