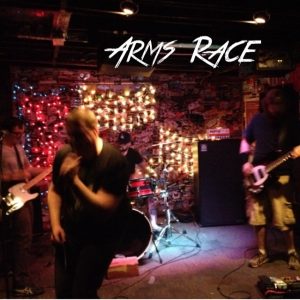 Dayton, Ohio post-rock and emo quartet Arms Race have shared their EP, Brought A Hug To A Gunfight, via Soundcloud here:

The band, which includes current members of Kris N, The 1984 Draft, and Giant Defiant, as well as former members of In The Black Hearts of Men, formed in late 2013. They recorded the EP with Hawthorne Heights guitarist Micah Carli in July 2014 at his Popside Recordings studio in Troy, Ohio, who also lended some guitar trickery to the EP.
The band, whose predominant influences include mid-90s alt-rock, grunge and emo, as well as new heroes of the emo revival set, are currently unsigned and physical release of the EP is as-of-yet TBD.
To date the band have done some regional touring, sharing the stage with City Mouse, Ultrasphinx, Winter Makes Sailors, Movehome, The Awful Nothings, The Story Changes, The Smug Brothers and Tod Weidner (of Motel Beds). More regional performances are in the works.
Follow the band here: https://www.facebook.com/ArmsRaceOhio