Quietly making his mark on the fringe of Hip-Hop, the New York City native Uncommon Nasa has been building healthy catalog of music. Recently touring on the heels of Halfway, produced entirely by Black Tokyo, is an unrelenting display of dexterous prose over grime filled beats that rarely pauses or tires. Giving a glimpse into his own life Uncommon Nasa shares “Pipe Dreams,” a gritty urban tale everyday life; the mundane, the druge, the bore. 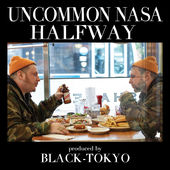